Nearly 40 years ago, Science Fiction fans were scared out of their seats by a monster movie like no other. ALIEN. With a monster that had acid for blood, who was born in the bowels of it’s victims, the Ridley Scott film set a high bar for every sci-fi monster film that followed. Now, to celebrate that event, 20th Century Fox is teaming up with Tongal for a film contest that’s out of this world … to make the next chapter in the Alien franchise. And all you need is a monster, a solid pitch, and a sheer sense of other worldly terror. 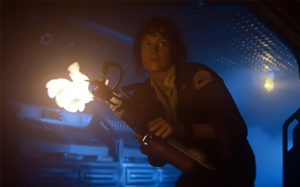 That’s right, Tongalers, we’re giving you the chance to create your own original story set in the biggest horror

franchise of all time: Alien! To celebrate the 40th anniversary of the original Alien, 20th Century Fox is tapping six visionary filmmakers in the Tongal Community to produce their own original short videos set in the aftermath of the original film. – Tongal Alien 40th Anniversary Shorts Project

Tongal is going to select the top six pitches to create a short based on the Alien franchise. Fox and Tongal are looking for original stories, with completely new characters (sorry, no Ripley clones, please), and your Pitch should draw on all the things that made the original Alien so groundbreaking. Those story beats include:

The 5-9 minute pitch should take place within the scope of the original 1979 Alien universe, and adhere to the following criteria:

Your PITCH must not:

Fox and Tongal underscore that the pitch must not use any original material, but may reference that material, and characters in dialogue.

The first phase of the contest is the Pitch Qualification Phase. This is where you submit your pitch, plus a 500 character or less synopsis of your creative approach, confirm your availability for production, and provide samples of your previous work. which you can submit here.

During the Pitch Qualification Phase, Tongal will select the 18 best pitches to move on to the next phase of the competition. Those 18 who qualify will be granted $2,000 to write up a visual treatment, pitch video, and short script to further develop their pitch story.

From this second pitch phase the top six Alien short pitches will be selected to enter the pre-production phase to create your short film.  Winners will receive a payout of $30,000 to create the following:

At the end of the Pre-Production phase, the top six filmmakers will enter Phase 4, production, which comes with a final payment of $5,000. In production, the top six filmmakers will be required to produce a 5-9 minute short video based on your approved pitch materials, a third second promotional trailer, a fifteen second promotional trailer, five still images pulled from completed footage, and a behind the scenes featurette. Filmmakers will also be required to provide all raw footage, pre and post SFX and VFX, on hard drives and you will be responsible for the costs of those drives and shipping.

So, all told, the winning entry will receive just a hair under $40,000, plus you’ll have your film marketed by Tongal as the next thrilling chapter in the Alien saga!

The deadline for submitting written pitches is July 3, with 18 selected for the next phase on July 6th. Read up on the rules and details here.

Contest: Make a Music Video for They Might Be Giants, Win Red Giant Software

By James DeRuvo (doddleNEWS) The latest contest to try your skills out on comes from Red Giant Software, who has teamed up with the indie rock group They Might Be Giants (no relation). The group […]

By James DeRuvo (doddleNEWS) Well, we knew they were talking about it. We knew it could happen. But is anyone else surprised that Disney actually pulled the trigger and is buying 21st Century Fox for […]