Thanks to a bit of a hack, a filmmaker has discovered that you can shoot up to 3 1/2 seconds of 8K video using the Sony A7RIII mirrorless camera. Not only that, but the same hack works with the Sony A7III for shooting 6K files. What is this insanity? Well, its taking advantage of Sony’s incredibly large buffer and firing off your burst mode with wild abandon.

Burstlapse is a hack to unlock Raw 12 bit continuous burst photos (83) over the course of 8 seconds, then importing those photos on a 24 frame timeline at 1 second per frame. The benefits are a crispy 8k video (Sony a7riii) or 6k video (sony a7iii) with the improved flexibility of RAW, an increase in the dynamic range 15 stops using a (RAW workflow in Lightroom or Photoshop) and improvements to color depth now at 12 bit. 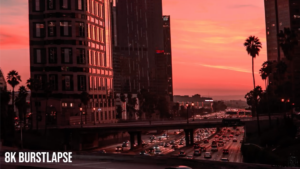 Josh Yeo of the YouTube Channel Make.Art.Now. calls the technique “Burstlapse” and it’s combining Sony’s burst mode with time lapse to get the full sensor resolution and dynamic range out of his camera for shooting video through still images. Technically, this isn’t really a hack, it’s just a case of a Sony owner knowing his A7RIII so well, he can take full advantage of its capabilities. As Apollo 13 flight director Gene Kranz once said, “I don’t care what something is designed to do, I care of what it CAN do.”

Yeo is essentially shooting a time-lapse using the 10 fps high speed burst photo mode in the Sony A7RIII. This technique enabled him to shoot up to 90 frames of 12 bit Raw into the camera’s huge buffer, before it starts writing to his high speed media card. The result is 3.3 seconds of 8k 24 fps 12 bit Raw video (6K on the A7III) thanks to a little math, and 15 stops of dynamic range, which is three stops more than Sony S-Log 2 offers.  And here’s how he did it:

Turn in manual mode. Set Drive mode to Continuous Hi+. Turn not he electronic front curtain shutter. Option, you can also turn on silent shooting. Select Raw-Compressed, which is the highest quality you can get. But some video editors don’t accept the Sony Raw still image files without first washing it through Adobe Lightroom. If you don’t want to have that extra step, you can set your image quality to JPG Fine L:42M and still get 8K. It just won’t be as sharp.

Once your camera is set, it’s a matter of creating special folders on your SD card to store each shot, so you don’t get them mixed up when shooting multiple shots. The Sony A7 system has the ability to create a new folder in the Setup page 6, and then it will bin them into a new folder every time you do a shot.

Now there’s another problem. When the Sony A7RIII shoots video, it shoots 16:9 letterboxed. That means there is dead Blackmagic space above and below the image, as you’re not using the entire 4:3 full frame image. That’s where the SLR Magic Anamorphot 1.33x-65 anamorphic adapter comes in. Not cheap for around $1800, but it not only gives you a nice cinematic image, but it squeezes that image so you can use the entire sensor.  Then you de-squeeze it in post and you have wide screen again, but without losing all that luscious 8K resolution and 15 stops of dynamic range.

Lastly, you need a remote wireless trigger, set at high speed burst. Connect your camera to a gimbal to keep the camera steady, and you have the makings of a great 8K hack (or 6K in the A7III). The only downside is that when shooting people, they get speed up when they move. But if they keep their movement to an absolute minimum, it can actually look pretty cool.

Check out the video below:

Now are you going to make a movie 3 seconds at a time? Well, probably not. But for experimenting, or for getting a great landscape shot for your documentary, or a great establishing shot you want in the best possible image, this is a great way for making your footage all it can be.

The next model in the new NVIDIA Turing line of Titan graphics cards is the Titan RTX, and with over 130 teraflops of performance and 11 GigaRays of ray-tracing performance. That makes the Titan RTX […]