To say that I’m looking forward to Avengers: Infinity War is a massive, massive understatement. In 2008, Marvel Studios launched something that was completely new in film, and began putting together a single cohesive universe where characters from each film could occasionally interact with each other.

That culminated in the first Avengers film in 2012, which was set up over the course of five movies. Since then, the films haven’t become any more reliant on each other, but they have shared characters more liberally. Even so, they have nothing on the sheer scale of Avengers: Infinity War, and Marvel has just released a featurette now that shooting has commenced. Check that out below:

Possible spoilers for all Marvel Studios films to follow!

Not much was revealed, per se, but I can really dig into some of the nitty-gritty details of Avengers: Infinity War. We know they’ll be shooting both Avengers: Infinity War and Avengers 4 back-to-back for an entire year. The reason for that has to do with scheduling, as the list of actors in these movies is obscenely long. Just having Star Lord, Spider-Man, and Iron Man in the same scene fills me with so much excitement, even when they’re not acting!

Something I want to point out is Tom Holland in this featurette is wearing a MoCap suit. They’ve used the same technology with the actor on Captain America: Civil War, so there might not be anything to it, but I can’t help wonder that maybe — just maybe — Ol’ Webhead will be encountering an alien symbiote. (But it appears Spidey’s suit is CGI’d in Avengers: Infinity War, just like Civil War.) 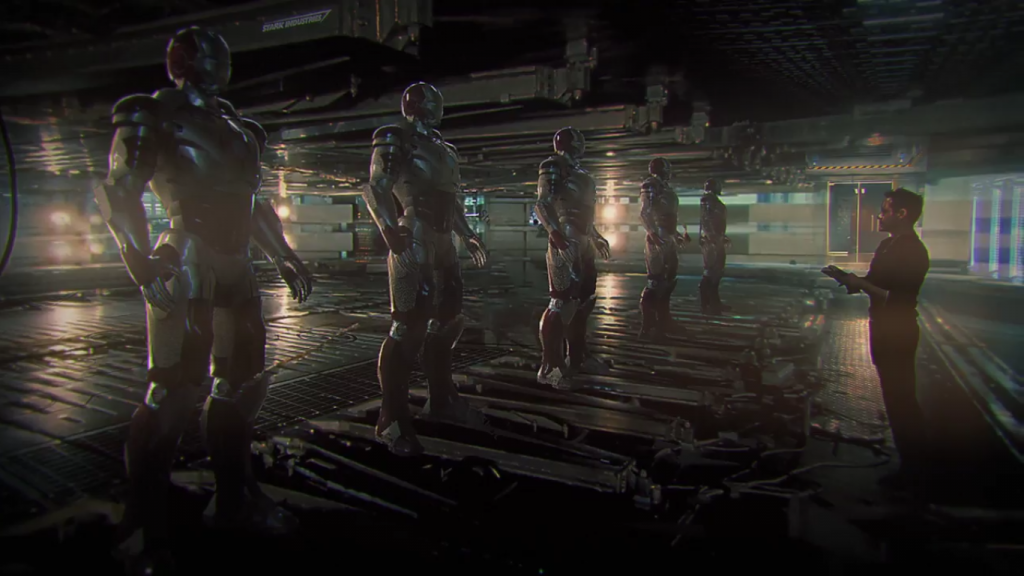 Another thing to note is that it seems Tony Stark still seems to think his Ultron project is a good idea. One of the pieces of concept art seems to show him looking over a series of Iron Man suits, very similar to the Mark 42 from Iron Man 3 (and Robert Downey Jr. himself said that’s his favorite armor in the above video). It is possible he’s stocking up for himself, but if he really does think something big is coming, then this may still be his best solution.

Finally, the piece of concept art from Avengers: Infinity War everyone is excited over has to be the one showing Rocket and Thor in the same frame together (see above). I don’t know when this piece was painted, but there is something interesting going on here. Firstly, it’s been widely reported that Thor will get a haircut in Thor: Ragnarok, but in this image he’s sporting his long hair. My guess is that this particular piece may be pretty old.

More interesting is the weapon he’s holding in it. We know that Thor will lose Mjolnir in Ragnarok, but it looks like that might be more permanent than we expect. It looks like Thor is holding the axe from the Ultimates line, rather than the hammer we’ve all become accustom to. In the comics he does lose his hammer and replaces it with a battle axe during Ragnarok, so it seems to be that he will do the same in the upcoming film version.

Avengers: Infinity War will premiere in theaters on May 4, 2018, followed by the untitled Avengers 4, which will come out a year later on May 3, 2019.