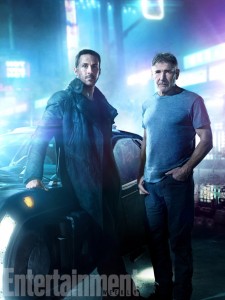 Sequels to successful movies are hard to make. Capturing the same lightning in a bottle twice while creating something new — and hopefully even better than the first — is a really tall order. Off the top of my head, the two films that did it the best were Star Wars: The Empire Strikes Back and The Godfather Part II.

Following up a movie that has become a classic over thirty years after the fact sounds nigh impossible but that’s exactly what director Denis Villeneuve has been tasked with. The new, full trailer for Blade Runner 2049 has just premiered online which you can below:

The film once again stars Harrison Ford as Rick Deckard, who will be reintroduced to the audience by Ryan Gosling’s police officer character K. The plot still seems a bit under wraps, but it definitely still deals with replicants, as Jared Leto’s character Wallace seems to be creating more of them in a pretty creepy sequence.

This Blade Runner 2049 trailer seems to heavily hint that K could be a replicant even more strongly than the original film hinted Deckard was. We know that whether Deckard is a replicant won’t be answered in this movie (and I suspect it is likely never to be answered), but that may not hold true for K.

But beyond all that, my god, is this going to be one stunning movie to watch! Villeneuve brought in Roger Deakins (Skyfall) to shoot this movie, and it looks mindbogglingly beautiful. The first movie was known for its visual style, and influenced a generation of films right up until today. What Deakins and Villeneuve have done is take that sensibility and just crank it up a few notches, which makes this film feel like a natural continuation of the first without being a retread.

It does look like this movie might be much faster paced than the original Blade Runner. I have no problems with that, because for as much I love just watching the first movie slowly unfold, I also realize most audiences won’t accept that in today’s climate. After Villeneuve’s film Arrival knocked my socks off last year, I have complete faith in him to do something special with this movie.

Blade Runner 2049 will premiere in theaters on October 6, 2017. Here’s the full synopsis for the film:

Thirty years after the events of the first film, a new blade runner, LAPD Officer K (Ryan Gosling), unearths a long-buried secret that has the potential to plunge what’s left of society into chaos. K’s discovery leads him on a quest to find Rick Deckard (Harrison Ford), a former LAPD blade runner who has been missing for 30 years.