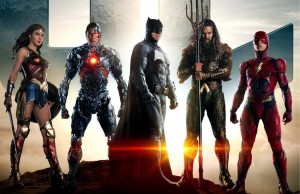 After several days of teasing the release of the Justice League trailer with quick 15 to 20 second teasers, Warner Bros. has finally dropped it onto the world wide web. Up to this point the only other look we’ve had at the team-up film was a four-minute sizzle reel that director Zack Snyder unveiled last year at the San Diego Comic Con.

This new trailer has a lot riding on it to deliver the kind of film DC fans have been yearning for. Did it succeed? You can find out by checking out the new trailer below!

Warner Bros. has also released a series of posters which you can see in the gallery below:

And while we’re at it, here are all five teasers that led up to the release of this trailer.

There seems to be some restraint here on how much the marketing department is willing to reveal which is a nice change of pace. Having said that, I can’t help but be reminded of Batman V Superman: Dawn of Justice’s marketing which started off well — before taking a nose-dive as more and more was revealed. Especially in terms of spoiling Doomsday.

Still, this seems to be a lot more fun than what we’ve seen before. This trailer has more funny bits in it than Batman V Superman and Man of Steel had put together. I hope that this is an indication Warner Bros. has learned their lessons and won’t be making the DCEU a dour place, anymore.

There’s a lot to love about this trailer which is as notable for what they featured as it is for what they’ve left out. We got a good look at both Mera and Commissioner Gordon as well as the Parademons. What we didn’t see was a single mention of Superman or Steppenwolf and I really hope they keep it that way for the entire marketing campaign.

I also can’t help but love the dynamic between Ben Affleck’s Batman and Jason Momoa’s Aquaman. If this trailer is any indication then they’ll be stealing the show anytime we have both of them onscreen. The DCEU looks like they’ve finally gotten their act together.

Justice League will premiere in theaters on November 17, 2017. Here’s the official synopsis for the film:

Fueled by his restored faith in humanity and inspired by Superman’s selfless act, Bruce Wayne enlists the help of his newfound ally, Diana Prince, to face an even greater enemy. Together, Batman and Wonder Woman work quickly to find and recruit a team of metahumans to stand against this newly awakened threat. But despite the formation of this unprecedented league of heroes—Batman, Wonder Woman, Aquaman, Cyborg and The Flash—it may already be too late to save the planet from an assault of catastrophic proportions.