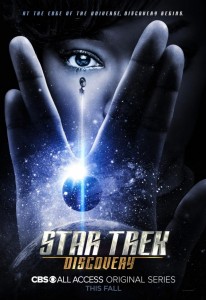 I am a life long Star Trek fan. I have issues with JJ Abrams’ Star Trek reboot, but understand why they went in the direction they did for the films. Star Trek Beyond felt like a step in the right direction, but I’m of the mind that the franchise still needs to be on the small screen.

Star Trek: Discovery was announced with Alex Kurtzman executive producing. I was ready to write it off with that announcement. Then, Bryan Fuller was brought on as creator and showrunner and I was elated, as he worked on Star Trek: Deep Space Nine and Voyager. Then he left, and I didn’t know whether the show would be any good or not. Now, CBS has finally given us a first look at the upcoming series, which you can watch below:

From my own friend feed, I can already tell that a lot of my fellow Trekkies are not pleased with the trailer. Personally, I think this was one hell of a fantastic trailer! It was epic with film-like visuals, and it seems there will be a very deep focus on character. Sonequa Martin-Green’s character seems to be a human raised on Vulcan which should make for a really interesting character.

The issue with this first trailer for Star Trek: Discovery from other fans is that this series seems to be too dark, but I personally love that aspect of it. I feel like at this point I should mention that Deep Space Nine was my personal favorite Trek series, so it seems that I am literally the exact target audience.

I’m not really the biggest fan of how Abrams changed the Klingons for Star Trek Into Darkness, and Discovery seems to have taken their cues from that series. It’s a minor issue really, but it still bugs me. There will be other issues that will bug hardcore Star Trek fans, such as the use of the Enterprise insignia, but that has not bugged me since the original series films.

The other changes I do really like. I’ve never been a fan of the classic 60’s era costumes, so I heartily approve of these uniforms. Brilliant choice in colors, too. Where the original (and every subsequent) series and film use red, blue, and yellow for each department, Star Trek: Discovery seems to use a more subdued gold, silver, and bronze scheme.

We still have no idea what the event that Bryan Fuller says this series will tackle, but I think I’m even more confused after watching this trailer. As far as I can tell, it has something to do with an unknown object in space and a Klingon sarcophagus.

Interestingly, I think that all of the shots in this trailer are from the first episode. Despite the series being titled Star Trek: Discovery, I don’t believe we’ve seen that particular starship at all in this trailer. The ship that we do see is almost certainly the USS Shenzhou — and I don’t think the odds of it surviving the pilot are very good.

Star Trek: Discovery will premiere in the fall, with an expanded episode order of 15 episodes on CBS All Access.