Last Friday, I attended a SIGMA Lens event at Duclos Lenses in the Valley. The event showcased the complete selection of Sigma Cine grade lenses and I have to say, they are most impressive. But during the event, I had a chance encounter with Phil Holland of RED, and he had his Hydrogen One smartphone with him.  What does the 4view holographic display really look like? Well, the closest I can come to explain it, is that it brought back memories of my childhood. 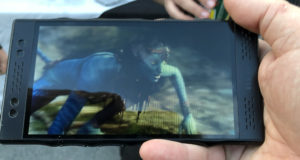 The image above really doesn’t do the Hydrogen justice. But while the marketing calls it a holographic display, my initial impressions were that it’s not exactly Princess Leia appearing out in thin air saying “Help me Obi Wan Kenobi, you’re my only hope.” In fact, I’m not so sure the word “holograph” came to mind when I looked at the Hydrogen One 4 view display. More like … VIEWMASTER.  You remember that toy as a kid, right? It was that stereoscopic viewing device made by GAF that you slipped a paper disc with dual images wrapped around the edge, and then you could look and get a virtual, stereoscopic view of a still image, complete with depth and a 3d look.. Almost like you were there.

As a kid, I spent hours looking at my Viewmaster, always pestering my dad to get me another wheel to look at (space ones were my favorite). I even wanted to be a Viewmaster photographer when I grew up and never understood why there weren’t any cameras that could shoot that way. You could, however, send pictures in to GAF and have them made into Viewmaster reels, but it wasn’t cheap.

Hydrogen’s 4 view display is kinda like that, only without having to use the Viewmaster to experience it. And that’s a good thing. It really does look like you could slip into the display and walk around the image. The 50th anniversary episode of Doctor Who, The Day of the Doctor, had a very similar depiction of paintings, that looks three dimensional, as if capturing a moment in time and putting it on canvas. Only with the RED Hydrogen One, that image goes beyond stills, and is able too show a moving image the same way.

I’m not suggesting that Jim Jannard is a Time Lord, mind you. I’m merely thinking that had GAF managed to move to the video version of the Viewmaster, the Hydrogen One may have been the ultimate destination (GAF did manage do create a virtual reality headset, but that’s a completely different application).  The image is really cool and in video, it’s that goggles free experience that virtual reality has been hyping for a few years now, but has failed to deliver in resolution or sharpness. Well RED seems to have done that, minus all the queasiness and the dorky feeling of wearing a huge set of goggles on your head. It really is that ViewMaster experience taken to the penultimate level.

But while the 4v display is indeed impressive at first look, I think that the ability of the Hydrogen One’s camera to shoot content in that 4view format is even more impressive. I didn’t get a chance to shoot with it and see, I wish I had. But I think it’s really going to be the game changer we all imagine it will be once it ships. Will we want  to shoot in it all the time?  Well no. Of course not. But it will make for a very interesting new genre to add to our collective content creation quiver.

And I can’t wait to see what the future holds with RED’s Hydrogen One.

RED May Team Up With Foxconn To Make Prosumer Cinema Cameras

By James DeRuvo (doddleNEWS) The Japanese news agency Nikkei is running a story that Foxconn Technology Group, the assemblers of the iPhone and other Apple products, is seeking to branch out and enter the digital cinema […]

By James DeRuvo (doddleNEWS) New York City is an iconic landscape for shooting aerial footage. The metropolitan background has amazing lights and details that draw the eye with every angle. But when you shoot it […]