While the resolution wars will continue to wage unabated, I honestly think that HDR is really the future of filmmaking. The bolder colors and higher dynamic range, does more for me than how ultra realistic a film image looks. So if you’re cutting together a film, how can you make sure the look of the finished product holds true to the HDR color gamut? Well, Acer is here to help with the a bold HDR supported PC monitor. But it’s not cheap.

One of the problems that PCs have had with adopting the HDR monitor standard is that a weaker, wider used standard called DisplayHDR was quickly used as a certification. The problem was that this certification relied on edge-lit LCD screens, which offered an uneven color gamut and rather poor black levels.

Consequently, this lack of a proper HDR standard led to a partnership between Asus, Acer and Nvidia to develop the G-Sync HDR certification, which offers full array local dimming in 384 zones.  Surpassing the DisplayHDR specification, G-Sync HDR made its debut in the Sony Z9D LCDTV and Samsung Q9FN. The result is richer, bolder colors and deeper black levels thanks to the consistent layout of the local dimming design. 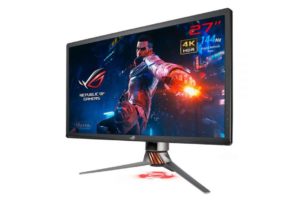 Designed primarily for gaming, Acer’s first entry into the HDR PC Monitor space is the 27″ Predator X27 IPS monitor. With a peak screen brightness of up to 1000 nits, this 144 Hz 4K monitor comes will offer 10-bit HDR10 color and full coverage of the DCI-P3 standard.   The Predator X27 also supports Nvidia’s ultra low motion blur (ULMB) technology, which is great for smoothing out action and fast on screen movement.

Moreover, with that kind of spec sheet, it would be tempting to head on over to Amazon right now and pick one up. But the downside is the price … the Predator X27 lists for $2,000. OUCH.  Granted, that’s a high price to pay to get an accurate HDR look on a monitor. Most post houses which opt to save a little money and go with reference monitor like the BenQ SW271, or even a 4K HDR LCD TV, and for that kind of money, you can pick up a 55″ or larger model. And if you’re a Mac head, you’ll likely have a nice new iMac Pro coming in June that offers similar support.

But if you’re a PC user, then having a monitor that can handle the visual heavy lifting may be worth its costly price tag. Asus will make the Predator X27 available in late June.

Yesterday, DJI announced Osmo Pocket, a downscaled Osmo three axis gimbal stabilizer, which adds its own 4K camera, and a huge array of video tools to capture that cinematic moment like a professional.  And since […]

By James DeRuvo (doddleNEWS) If you’ve been hearing about BitCoin and the crypto currency craze, you may be as confused as the rest of us. This digital currency has reached a real world value of […]