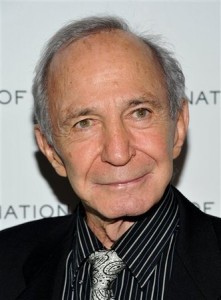 LOS ANGELES (Reuters) – Actor Ben Gazzara, known for his brooding tough-guy presence in dozens of films, television shows and stage productions over his long career, died of pancreatic cancer on Friday at a Manhattan hospital, his lawyer said. He was 81.

The New York-born performer died Friday afternoon at Bellevue Hospital Center, with members of his family at his side, according to his attorney, Jay Julien.

Born Biagio Anthony Gazzara to Italian immigrant parents, the young actor began his career in live theatre, most notably in the role of Brick in the original Broadway production of Tennessee Williams’ “Cat on a Hot Tin Roof,” directed by Elia Kazan.

A three-time Tony nominee for his stage work, Gazzara made his film debut as a sociopathic military academy cadet in the 1957 drama “The Strange One,” followed by his breakout role as an accused killer in Otto Preminger’s 1959 hit courtroom drama “Anatomy of a Murder.”

His character in that film, Army Lieutenant Frederick Manion, claims in his defence to have killed a bartender in a fit of rage because the victim had raped and beaten his wife. Jimmy Stewart starred as Gazzara’s lawyer.

Best known for playing emotionally complex men and villains, Gazzara went on to work with numerous high-profile Hollywood directors, including John Cassavetes, with whom he collaborated on several films, including the 1976 gangster drama “The Killing of a Chinese Bookie.”

His credits also included a role as porn-film producer Jackie Treehorn in the Coen Brothers’ 1998 cult comedy classic “The Big Lebowski” and a supporting role in the 1999 remake of the art-heist drama “The Thomas Crown Affair,” starring Pierce Brosnan and Rene Russo.

On television, Gazzara starred for two seasons, 1965 to 1968, on the NBC prime-time drama “Run for Your Life.” He played a wealthy, successful lawyer, Paul Bryan, who quits his practice after learning he has a terminal illness and then embarks on a globe-trotting quest for adventure before he dies.

The role earned him two Emmy nominations as best actor in a lead dramatic role. He picked up a third Emmy nod for his 1985 role in the made-for-TV movie “An Early Frost,” and won an Emmy for his supporting work in the 2002 HBO television film “Hysterical Blindness.

He earned Tony nominations for his appearances in three Broadway productions of the 1970s, a revival of “Who’s Afraid of Virginia Woolf?” and his dual roles in a double bill of the plays “Hughie” and “Duet.”

Gazzara was married three times, with his first two marriages ending in divorce. He is survived by his third wife, Elke, and daughter Elizabeth.