This week, Adobe announced new features coming to Adobe Creative Cloud applications. The new software will be showcased at IBC and released later this year as part of the fall update to the Adobe Creative Cloud subscription service. Adobe did not announce a release date.

The details below are taken from Adobe’s press materials.

Project Rush is an all-new, cross-device app that lets you create and share professional-quality video, including simplified color, audio, and motion graphics. A common interface and background syncing make it easy to move between mobile devices and desktop systems. A shared architecture means you can open native Project Rush projects in Premiere Pro when you need to take your work to the next level. Built on core Adobe technologies from Premiere Pro, After Effects, and Audition, Project Rush gives you the power to capture, create, and deliver online content from almost anywhere. Project Rush remains in beta.

Motion Graphics workflows
Motion Graphics templates provide a comprehensive toolset for creating and managing imagery and brand identity in video content, combining polished graphics with efficient customization in editorial. New authoring tools in After Effects streamline production in Premiere Pro with parameter grouping to organize the template and order the workflow for editors.

Data-driven infographics turn numbers into stories in Premiere Pro. Drag and drop spreadsheet files onto Motion Graphics templates to generate visual representations of your information. Even better: updates to the spreadsheet are reflected automatically in the graphic.

Intelligent audio cleanup
Instantly improve your audio by removing background noise or reverb with new Reduce Noise and Reduce Reverb sliders in the Essential Sound panel. Make audio easy with intelligent tools and take your video productions to the next level.

The Lumetri tools turn color and light into an integral part of editorial so you can refine your cuts and your color in the same creative workflow.

Create content that puts your audience into the middle of the action and jump into immersive video with new support for VR 180, including optimized ingest, editorial, and effects, for monoscopic and stereoscopic content. Output finished videos in the Google VR180 format for YouTube or other platforms.

As with existing support for 360 content, you can view 180 media on-screen as flat equirectangular images, mouse around rectilinear VR view (also on screen), or using VR headsets with the Adobe Immersive Environment. Turn films into experiences with immersive storytelling in Premiere Pro.

Spatial Markers: Review immersive media more efficiently in the Adobe Immersive Environment. Place spatial markers on your media while in your headset so you can easily find those areas when you return to the desktop Timeline.

Theatre Mode gives you a new portable reference monitor within the Adobe Immersive Environment: a virtual screening room for collaborating with your director or producer, whether for 2D or immersive content, or a combination of both.

Improved invitations workflow: Save time by inviting collaborators to a team project using groups synced from your organization’s directory.

Collaborative workflows with Motion Graphics templates
Long a hallmark of After Effects and the Adobe apps, connected workflows drive efficiency and empower creativity. Motion Graphics templates encapsulate complex After Effects projects into single files with simplified controls for use in Premiere Pro. Workflows like this, including Dynamic Link integrations, eliminate any need for intermediate rendering between applications, speed up production and keep your media editable at any stage of the pipeline.

Simplified authoring: Designed to streamline editorial in Premiere Pro, After Effects artists can now hand off uncluttered Motion Graphics templates with editable parameters organized into groups with custom headings and twirl-downs for showing (or hiding) each set of controls. Your editors will love you.

Font controls: Unlock font settings and enable editors to change typefaces without having to ask you to resubmit the template. Like everything else in Motion Graphics templates, you decide which elements can be customized and which should not.

Responsive Design—Time: Preserve the integrity of keyframes within flexible, stretchable After Effects compositions to protect designated regions, such as intros or outros.

Faster animation and compositing with more control
Advanced Puppet pins for Mesh Sculpting add new life to your animations. Advanced pins allow you to define the position, scale, and rotation of the pin giving you significant control over how the Puppet effect mesh deforms around that pin. Use Bend pins to create organic movements within a design, such as a breathing chest or a wagging tail.

Depth Passes: Position objects quickly and easily in 3D space. Access the depth data of native 3D elements directly within After Effects and easily composite an image layer to look as if it’s a part of a 3D scene. Apply depth effects to make elements look natural or use depth data as part of your creative workflow to simulate 3D looks. Depth passes work with either the Classic 3D or the CINEMA 4D renderers inside After Effects. 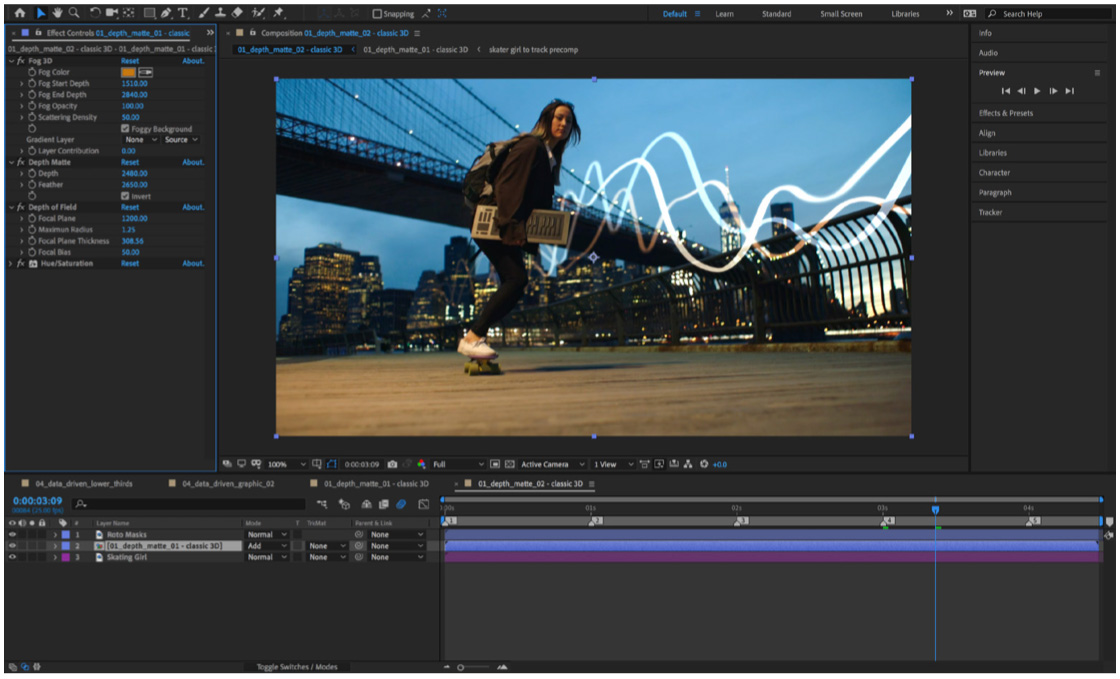 End-to-end VR 180: Augment editorial workflows for immersive content with new support for VR 180 immersive content. Add VR 180 effects and work interchangeably with 180 and 360 material. Output finished videos in the Google VR180 format for viewing on YouTube or other platforms.

Format Support: Work faster with hardware-accelerated decoding of H.264 and HEVC video on macOS, and import files encoded with the HAP codec.

Easier & Faster Expressions: Accelerate your animation workflow with a modern new JavaScript engine. Expressions are easier to create and run up to five times faster than before.

Other new features include brand-new in-app learning tools for users who are starting out with After Effects, group invitations for Team Projects, Theatre Mode for previewing flat video in an HMD, the ability to set guide positions numerically, and more. 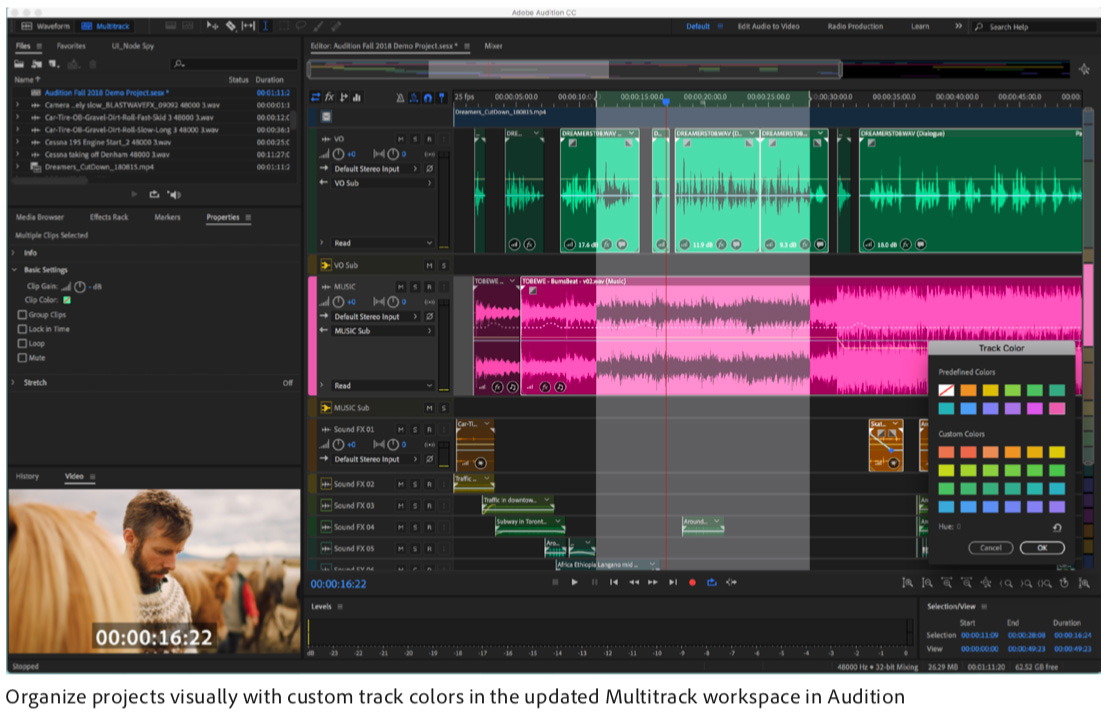 Adaptive algorithms apply real-time adjustments based on the specific characteristics of sound clips. Work fast and keep it simple using the DeReverb and DeNoise sliders in the Essential Sound panel or choose them in the Effects rack for even more power and control.

Powerful recording and mixing
Build stories in sound within a rich, responsive multitrack environment with all the tools you need for recording and mixing audio projects of any kind, including video, broadcast, or podcast content. Playback 128 tracks; record 32 tracks – all at low latencies with no drop-outs and no proprietary hardware required.

With the multitrack makeover, your project looks as good as it sounds. High contrast colors and reduced clip chrome improve visibility and organization. Scale waveforms and make gain adjustments directly inside clips for visual feedback and efficient workflows.

One-click session management: Setting up a session has never been easier. Now add as many audio and bus tracks as you want – all at once. Clean up empty tracks with a single command.

Zoom to Time: Zoom presets for specific durations give you different views of your content quickly. Move easily from the big picture to the details as you work. 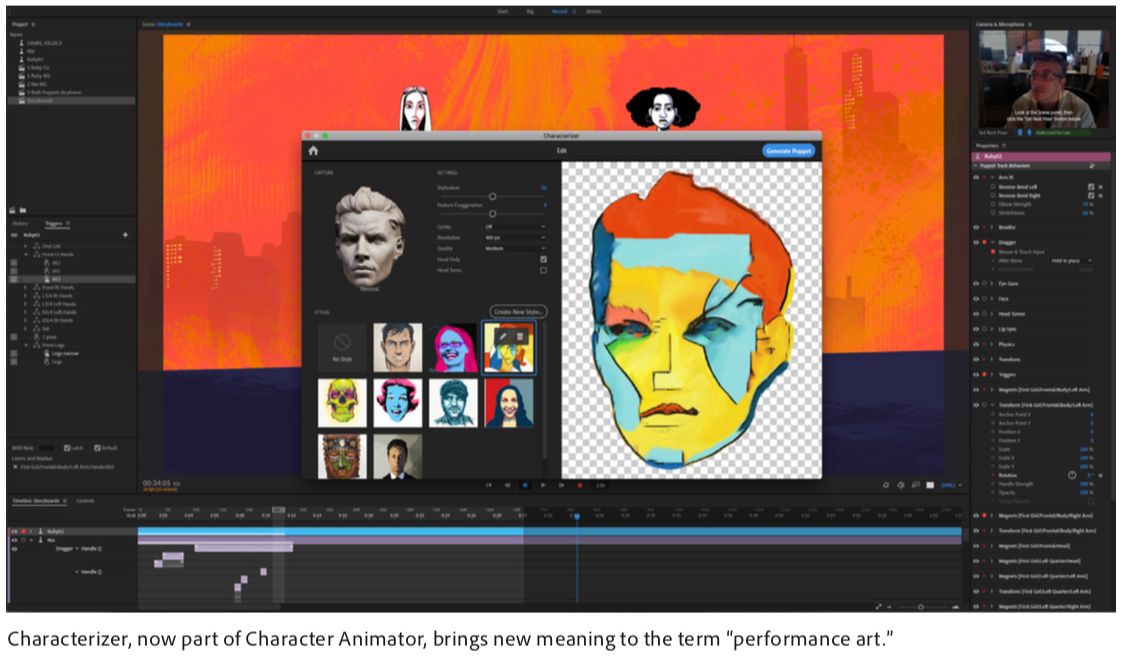 Your puppet is created in seconds. Use a webcam, or other connected camera to record performances, just as you would with any Character Animator puppet, and transform your own image into a work of animated art.

More new features that advance the art of animation

Replays: Re-use your best takes, like that one great laugh or perfectly-timed fist bump, live or in recorded performances. Trigger a facial-expression or signature high five at exactly the right moment. Trim, extend, reposition and blend Replays in your timeline, after the fact, to fine tune the final result.

Magnets: Make your animations more lively using Magnets, a new feature that allows puppets to throw, drop, and pick up items, like tossing a baseball or grabbing a cup of coffee.

Squashiness Parameter in Physics: Add more life to your puppets and scenes by adjusting the squashiness parameter in the physics behaviors, allowing characters and objects in scenes to behave more like traditional cartoon animations.

History Bookmarks: Access previous versions of your project’s history, giving you the freedom to experiment with new ideas and versions without fear of losing your original or current work.

Other features include improved control for arm movement with Inverse Kinematics (IK) and UI improvements, such as workspaces and a collapsible Timeline view.

Updated search filters will help you find the perfect clip even faster. Search for footage by frame rate and by duration, whether to hone in on cinematic 24 fps content or for maximum creative latitude with a longer clip.

Use Motion Graphics templates, including animated titling and lower-thirds with editable effects and text, to add sophistication and polish to video content. Accessible right from the Essential Graphics panel in Premiere Pro CC, Adobe Stock makes it easy to search and preview templates, and add them to the Premiere Pro Timeline with drag-and-drop ease.

doddleTALKS Tech – Bill Roberts and Adobe in the Cloud

By James DeRuvo (doddleNEWS) In this episode of doddleTALKS Tech, Adobe’s Bill Roberts joins us to talk about the 150 new features of Adobe Creative Cloud.