We are pleased to announce new support for exporting Apple ProRes on the Windows platform with today’s updates to the Adobe Creative Cloud video apps. It is one of the most popular codecs in professional post-production and is widely used for acquisition, production, delivery, and archive. Adobe has worked with Apple to provide ProRes export to post-production professionals using Premiere Pro and After Effects. Support for ProRes on macOS and Windows helps streamline video production and simplifies final output, including server-based remote rendering with Adobe Media Encoder. – Eric Pilpott, Adobe Blog 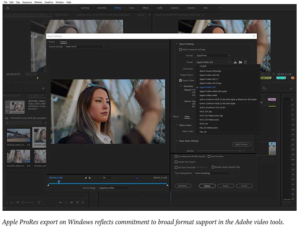 Apple ProRes has been read only on Windows devices for quite some time, which was great for importing and viewing within Premiere, but if you wanted to output your master to ProRes, you were out of luck.  Sure, there were several third party ProRes writing options, but they were hit and miss at best. Only Assimilate’s Scratch was able to do it consistently. But that option was out of the budget for many small post production budgets,, and many users would simply use a temporary license every time they needed to output a project piecemeal, which is OK in the short term, but more expensive and time consuming overall.

The only other option would be to export to DNxHR, or GoPro’s Cineform codec. Consequently, that comes with its own perils, especially since Apple is abandoning legacy codecs, including DNxHR and Cineform, in future versions of macOS beginning next year. It’s not inconceivable to assume that other companies will follow suit, as we move farther away from 32 bit legacy options.

Promised back in 2017, Adobe has finally added ProRes export support, giving users and early present for the holidays, and it comes with Apple’s blessing and support. In all three Adobe applications, users can write to ProRes 4444 and 422. Users can also re-encode directly from Adobe Media Encoder on servers as well.

This also opens a lane for turnarounds between platforms, should members of your team prefer to work on Mac, as opposed to Windows machines.

There is also support for importing of Rec2020 and PQ/HLG HDR media wrapped in a ProRes container. Media Encoder also fixes a few bugs, including where attempting to import H.265 files from Adobe After Effects appears disabled and offline. Media Encoder now won’t crash when trying to rename your ingest files with symbol characters like >>, /, and ?.

Meanwhile, in After Effects, version 16.0.1 fixes issues with Mocha AE CC vs6.01 which include issues with playback controls, group layers visibility, and application crashing in either low resolution mode, or when exiting the interface. There’s also several bug fixes for using Blackmagic Video Assist and HyperDeck, and several others (list found here).

For more information, and to read the release notes for yourself, visit the Adobe Blog linked above.

If you cut your video on the MacBook Pro using Adobe Premiere, you may have noticed that the audio has become deafening with Creative Cloud CC 2019 update. So loud, that users have complained of […]

By James DeRuvo (doddleNEWS) Has your email account been stuffed with email notifications of Cyber Monday and Black Friday deals? Yeah, me too! But since we’ve already talked about film and video production Hardware deals and ideas […]

By James DeRuvo (doddleNEWS) With up to 82% of all internet traffic being video streaming, we are currently in the golden age of video. Adobe says that not only will streaming content be the focus, but also […]