We’re now 3 years post-DTV conversion in the United States, when all full-powered and licensed TV stations were required to sign off their long standing analog signals and go digital-only. High Definition is the new video standard, and most raw footage today is shot in the 1080i/p format.  But the million dollar question is: What about the millions of hours of digital and analog footage out there, found in collections, archives and bins? Do you keep it, donate it or trash it? Is it still usable? Yes, and you can upconvert it to high definition very easily. (I also include video examples of each.)

The method of up-converting is easy, and I prefer to use Adobe Premiere Pro when working in video production.  I myself have been shooting video as far back as 1993 on VHS (yes, I proudly state that and thus date myself).  TV stations and cable channels are still using their old analog/DV formats when they need to pull file footage or vintage programming.

For my Thesis in late 2009 for my Masters Degree in Education from Nova Southeastern University, I produced several reels comprised of both HDV and DV footage, including a considerable amount of archived material on VHS and 8mm tape.  When you’re working with DV in an HD project, be prepared because there WILL be resizing involved.

Here’s what can be done, by using a frame of VHS footage from my college TV Production archive, dubbed to DV and then captured by Adobe Premiere Pro.

**I will be using the terms ‘AVI,’ ‘NTSC,’ ‘DV,’ and ‘analog’ interchangeably since HDV in the Premiere workspace is MPEG-based proprietorially and most of our standard media was AVI/DV based.**

1.) The simple Two-Step Fit-to-Frame With No Background.

You can import your NTSC footage to your project – chances are you’re dealing in the old and trusted 720 x 480 AVI format.  MPEG will work too.  As with HDV, choose your I/O points, and drag your clip down onto the timeline where you want it.  Right click the clip on the timeline and select SCALE TO FRAME SIZE. It’ll look like this (the ‘square in the rectangle’ for those who call it as they see it):

If  you would prefer something filling in where the 4 x 3 ends on each side (effectively creating ‘pillar boxes’ or vertical letterboxes), do the same step as above in Number 1 and boot up PhotoShop or Flash.  Import your NTSC footage to your project – chances are you’re dealing in the old and trusted 720×480 AVI format.  MPEG will work too.  As with HDV, choose your I/O points, and drag your clip down onto the timeline where you want it.  Right click the clip on the timeline and select SCALE TO FRAME SIZE.  Basically layered as a second video track, I built a simple solid color Photoshop PSD file based on my HDV project specs to import and use underneath the AVI to look something like this.  You can even build an animation in Flash and use that.  Premiere DOES read JPG, PSD and FLV for future reference.  In this case, the PSD MUST go on the video track BELOW the AVI or else you end up with your own blue screen of death.  If you have the creative juice (or time), you can use your artistic skills and build something really snazzy:

Another option, you can use a marvelous little, and extremely affordable, up-convert plugin from Red Giant called Magic Bullet Instant HD. Instant HD effectively takes your SD video and fits it within your HD parameters, i.e. takes  your 720 x 480 AVI and resizes it to an HDV size of your choice.  I’ve had this plugin since May 2010, and it’s come to my rescue many xtimes.  Easy install, easy use.  Drag, drop, set, and render.  The plugin works with AVI as well as MPEG, so you have a choice to either use your raw AVI, or go ahead and transcode to the highest quality MPEG you can produce. I chose to transcode to HQ MPEG. Go ahead, I dare you!

For this job, I chose for my codec settings:  ‘Fill 1440 x 1080 NTSC DV Widescreen and Best,’ Filter: QUICK, Sharpness: 2, and Antialiasing: 6.   Simply make your I/O points, drag to the timeline, and then drag the iHD plugin on to it, and make your codec selections.  Render out and export the edit. I’m happy with the result of mine: 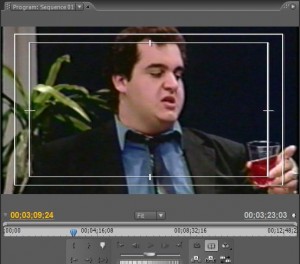 SD-to-HD Upconvert Using Plugin/Software from Patrick Sammon, Jr. on Vimeo.
We media techs have choices when it comes to using DV/AVI footage in HD environments.  It all depends on how we want to proceed, and the role in which your archive footage plays in your final cut (no pun intended).

Author’s Notes:  These stills are from a March 2002 three-camera live-to-tape shoot project of the diner scene from the Denzel Washington film Training Day (2002).  This was my TV Production final class project: a scene that could go on longer than 10 minutes without a cut.  Dubbed from VHS to DV, captured to Adobe Premiere Pro via DV and Firewire 400.

Part one can be found here. By Andrew Devis (doodleNEWS) A recent addition to Premiere Pro is a new tab on the ‘New Project’ dialogue box called ‘Ingest Settings’ which is for  both bringing assets […]

By Kevin P. McAuliffe (doddleNEWS) In part two of our look at getting ready to edit in Premiere Pro CC, we covered the Memory Preference, as well as creating your first sequence. Part 1 was about […]

A new Premiere Pro CC Tutorial By Andrew Devis (doodleNEWS) As I mentioned in an earlier post, there are various methods of animating your audio inside the Audio Clip and Audio Track mixers in Premiere Pro. […]