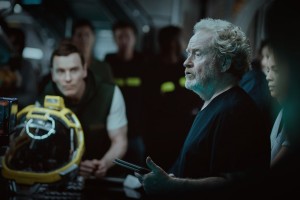 A new set photo from the production of Alien: Covenant has been released showing Ridley Scott giving directions to the cast and crew.

However, the most interesting part of the picture, which admittedly doesn’t give much away, is star Michael Fassbender in the background, to the left, who is ‘full-bodied’ and sporting black hair.

Fans of the franchise will know that Fassbender’s character David, who is a robot, was decapitated at end of the last installment Prometheus, and also had Lawrence of Arabia-inspired golden-locks.

Legendary filmmaker Scott, who helmed the iconic Alien (1979), has previously revealed that there will be two versions of David in this movie – so the new hairdo may well be an easy way of telling the pair of ‘synthetics’ apart.

The helmet in the snap also looks similar to those featured in the director’s classic original rather than the glass-masks used in Prometheus .

The project, which is a direct sequel to Prometheus – a prequel to the ’79 movie – has been drip-feeding set photos over recent months.

In May, we were treated to a picture of Katherine Waterston, who is the new Sigourney Weaver-style heroine of the film, playing a character named Daniels.

Pictures from the set of Alien: Covenant also appeared online showing a desolate planet with tortured-looking creatures, possibly the Engineers from the last movie, crawling along scorched earth.

What we do know about the film is that Fassbender’s David meets up with the crew of colony ship Covenant on a remote planet. The new crew will feature Daniels and almost certainly a new David 8 robot. Other cast members include Danny McBride, Billy Crudup and Carmen Ejogo.

Set as the second chapter in a prequel trilogy that began with Prometheus, Alien: Covenant connects directly to Ridley Scott’s 1979 seminal work of science fiction. It begins with the colony ship Covenant, bound for a remote planet on the far side of the galaxy. There, the crew discovers what they think is an uncharted paradise, but is actually a dark, dangerous world — whose sole inhabitant is the “synthetic” David, survivor of the doomed Prometheus expedition.