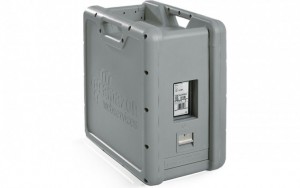 The story of how the sequel to Toy Story was almost completely lost is somewhat of a legend. One by one, the backups were either corrupted or deleted, and if it weren’t for a single producer, who had backed up the film’s workflow onto a hard drive to work on at home, Pixar would’ve had to have started over. The lesson is, backing up is crucial, and Amazon wants to help you with the Snowball, a 50TB suitcase hard drive that you can use to backup and archive your entire film before it’s too late.

“The new Snowball appliance is purpose-built for efficient data storage and transfer. It is rugged enough to withstand a 6 G jolt, and (at 50 lbs) light enough for one person to carry. It is entirely self-contained, with 110 Volt power and a 10 GB network connection on the back and an E Ink display/control panel on the front. It is weather-resistant and serves as its own shipping container; it can go from your mail room to your data center and back again with no packing or unpacking hassle to slow things down. In addition to being physically rugged and tamper-resistant, AWS Snowball detects tampering attempts.” – Amazon.com Blog

When dealing with digital creative assets, it’s important to have a good archival backup strategy. Peter Krogh wrote a great book on the subject called the DAM Book: Digital Asset Management for Photographers where he recommends three backups, on two different mediums, one being off site. Amazon can handle two of those with the Snowball, a 50TB suitcase sized hard drive that Amazon will rent you for $200.

Tamper and weather resistant, Snowball is built to, as Timex used to say, take a licking and keep on ticking. It’ll even survive a 8.5G impact with no problems.

In addition to be super sturdy, Snowball also automatically encrypts incoming data at 10GB per second, and with it’s tamper resistant circuitry, is able to take action by detecting any tampering attempt and shut them down. Off loading your data is incredibly quick too, being able to transfer 1 petabyte of data in about 15 hours. Snowballs also act in parallel, and with up to 10 Snowballs, you can have over 100GB of thruput. WOW. 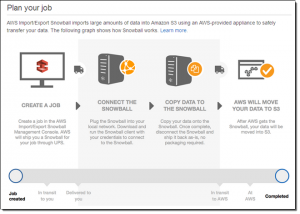 Users download the Amazon client size app, and input the amount of data that they want to transfer. The app then determines how many Snowballs are required and you can order them right there.

The Snowball will be sent by UPS 2 Day Air, and you then connect it to your device, connect it to your network, configure the IP address (you can use your own or the device can fetch one from your network using DHCP), and install the AWS Snowball client. Snowball then  begins to encrypt and download your data for you. Then it will notify the shipper pick up. Users don’t even have to power it, as Snowball comes with it’s own 110 v power supply. It’s all plug and play.

Snowball also acts as its own shipping container too, thanks to it’s ultra rugged Pelican like shell. Users don’t even have to put a shipping label on it, as Snowball will generate its own shipping label via the eInk display – and it doesn’t matter what service you use, and when you open it, it will turn into a user interface. That’s pretty slick.

Once your shipping service picks it up, they transport it directly to Amazon Web Services, which then uses their S3 deep storage service to upload your backup to the cloud.  The other cool thing is that Amazon says that it takes less than a day to ingest it once they receive it. So you end up getting your data securely delivered and up to the cloud in less than a week.

All for $200 per 50TB. You can’t buy them, you can only rent them, and the rental covers a 10 day period, extra days are $15 per. The service though, doesn’t include the S3 data storage rates, and it’s not altogether clear how much that really is, except that it’s based on outbound traffic, not incoming data storage, and is calculated by the GB. There is, however, a minimal charge for data transfer, but it’s unclear if that’s included in the $200 Snowball rental fee.

Still, it’s a cool way to securely backup your data to the cloud. Learn more about Snowball at Amazon here.

Here’s the video on how Toy Story 2 was almost lost: