There’s no denying that GoPro has changed the way that filmmakers grab the moving camera shot, especially with action oriented scenes. And there’s no denying it gave many content creators a valuable tool to get their feet wet in filmmaking. But as time has gone on, lower priced competitors have eaten into the market share, and now there’s yet another so-called “GoPro Killer” on the market. Why should you care? Because the SiOnyx Aurora looks to have shockingly good low light performance. 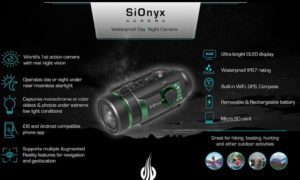 Dubbed as the “first action camera, with actual night vision,” the SiOnyx Aurora enhances low light footage as if there is a row of lights illuminating the scene. At the heart of the Aurora design is an ultra low light CMOS sensor which can “trap” 10 times more light than a standard CMOS sensor for operation in “near moonless starlight.”

The Aurora can capture monochrome or color videos, and photos, and supports multiple augmented reality features including navigation and geolocation.

There is a little bit of noise, as one would expect, but you have to admit, that looking at the footage above, when compared to the GoPro Hero5, it does a hell of a great job providing enough dynamic range to get detail and capture the scene in near total darkness. For a custom night time action scene, where you can’t have lighting set up just about everywhere, it may beat the overused green hue of night vision for shooting first person action shots, like in a special ops scene. It will at least provide some color, and some of the noise can be dealt with in post thanks to plugins like Magic Bullet Denoiser, or  Dark Energy. I also kinda like the otherworldly glow it provides, keeping the viewer slightly off balance, like the scene is being shot on another planet.

The downside is that the highest quality of the video is 720p, and the still image quality is totally unusable, which is a bit disappointing in a 4K world. And one thing is also certain, the sound quality of the microphone SUCKS. Seriously, guys, you really need to upgrade that in version 2. Especially since SiOnyx is asking a hefty $799 for it. Consequently, I don’t think that GoPro will be losing sales any time soon.

More details can be found on their website here.

Hot Wheels and FortNite Could Be Serious Cinematic Tools for PreViz

By James DeRuvo (doddleNEWS) Fun, Games and Filmmaking!  I wouldn’t ordinarily write about a toy car, but since it can help with PreViz, and since this thing uses a GoPro, I figured, what the hell?! […]

The GoPro Fusion has been a rather quiet project for the last few months. Since it’s launch last year, the Fusion has been showing off some pretty impressive “angel views” and some over capture, which […]