Apple is continuing the leave a trail of breadcrumbs towards their “It’s Showtime” event on March 25th. Yesterday, it was resurrecting two forgotten iPads, and today, we get a long overdue update to the iMac, with refreshed 4K and 5K models offering twice the performance as the previous generation.

Over six hundred and fifty days after the last update to the iMac platform, Apple has updated both the 21.5″ 4K and 27″ 5K iMac with new CPU and GPUs, but keeping the display essentially the same. The 21.5″ 4K iMac comes with a six core 3.2 GHz Coffee Lake i7 processor, promising up to 60% faster CPU performance with Turbo Boost giving the 4K iMac a maximum speed of up to 4.6Ghz. The GPU also gets a boost with 80% faster graphics Thanks to the AMD Radeon Pro 500X series graphics card and 4GB of VRAM.

By contrast, the 27″ 5K iMac receives a 9th Generation Core i9 processor with speeds up to 3.6 Ghz, or 5.0 Ghz with Turbo Boost. The result is 2.4x faster CPU performance, and 60% faster graphics courtesy of the Radeon Pro 500X and 8GB of dedicated VRAM.  Users can also choose an even faster GPU option through the Radeon Pro Vega, which uses High Bandwidth Memory to double the bandwidth of the GPU. 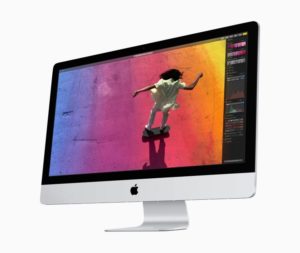 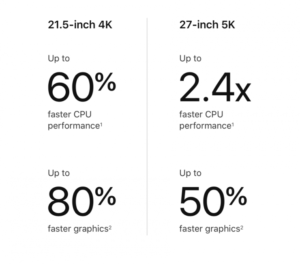 Moreover, Apple has chosen to stick with the same retina display as the previous model, meaning that while the GPUs have gotten a model improvement, the display isn’t going to be able to squeeze out any better sharpness and resolution than before.  Still, Apple aims square at RED Users with the 5K iMac, claiming that when working with REDCODE RAW, users will get an 80% faster export speed when pushing out to ProRes 422HQ in Final Cut Pro X.

Both models come with either the standard Fusion Drive or SSDs, with up to 2TB for the 27″ and 1TB for the 21.5″ respectively. RAM options include up to 64GB of DDR4 RAM for the 5K model, and up to 32GB for the 4K model.

So it seems to me that Apple is really pushing users to head towards the more powerful (and more expensive) 5K iMac or iMac Pro, while those who have to work on a budget get stuck in the slow lane.  If all you do is surf the internet, or enjoy YouTube videos, that may not be a big deal. But if you’re seeking to edit 4K video, well, you can see the problem almost instantly.

But here’s the thing. The long overdue refresh of these iMacs is rather dubious, because Apple has chosen to ‘update” them with processors that, while new to the systems, came out in 2017, and the iMac Pro gets nothing but a boost in GPU and RAM. So, even though it’s just now being refreshed, all models still remain behind the state of the art, which is the Intel Core-X.  So, what’s the deal?

Since Apple is planning on moving towards their own processors in 2020, it kinda makes sense that this could be the final Intel iMac generation, and would only be a modest update. This would leave Apple  with more focus on designing their own chips for the next time around. But following the advice of never buying the first generation of any new technology, it would mean it’s going to be a long time before you can get a mature iMac system for an 8K future.

Hackintosh anyone? Check out this one based on the Intel NUC:

The iPad Pro Is Becoming a Favorite Tool for Storyboarding

By James DeRuvo (doddleNEWS) When it comes to preproduction, storyboarding is the next creative step after, or sometimes during, writing the script. And thanks to the advancement of technology culminating in Apple’s iPad Pro, many […]

by Larry Jordan Apple has updated Final Cut Pro X twenty-eight times since its initial release in June, 2011. Some of those updates have been significant, others less so. When it comes to features, Apple […]