As he always does when releasing a new product, Apple’s Senior Vice President for Worldwide marketing assured customers that the updated design for the MacBook Pro is the fastest and most powerful notebook Apple has ever made. But the lingering question is … whether the next generation butterfly keyboard is fixed.

“The latest generation MacBook Pro is the fastest and most powerful notebook we’ve ever made,” said Philip Schiller, Apple’s senior vice president of Worldwide Marketing. “it’s the best notebook for pro users.” 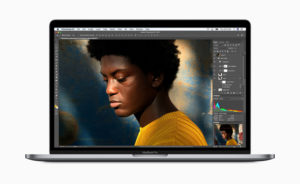 Designed clearly for the professional in general, and I rather think the filmmaker specifically, the MacBook Pro is stacked with an eight generation 6 core Intel Core Processor, 32GB of RAM, and up to a 4TB SSD. The retina display continues to get better color gamut and dynamic range, thanks to improvements in Apple’s latest True Tone Technology, and, unfortunately, Apple continues to double down on the rather useless TouchBar.

But the 8th generation Intel Core Coffee Lake processors are a year old, making me wonder why Apple didn’t wait for the 9th generation Ice Lake processors, which are scheduled to be announced next month. I’m guessing that it has much to do with Apple’s commitment to moving beyond the Intel platform and towards their down, in house designed chips, which Apple is rumored to be putting into the Mac lines by 2020. Consequently, this new MacBook Pro could be the last Intel based Mac laptop to come out of Cupertino. 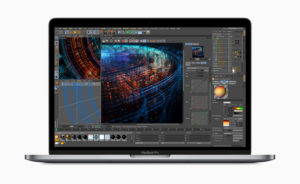 A closer look at the True Tone Retina display casts over 500 nits of brightness, and supports the standard P3 wide color gamut. Apple also says that through the touch bar, users can dial in a more natural viewing experiencing for video editing, design, as well as everyday tasks.

For security, Apple has put in their latest T2 security chip, which was first introduced in the iMac Pro last year. The T2 chip offers secure boot performance, as well as what Apple terms “on the fly encryption” of all your data. And Hey Siri comes to the MacBook Pro for the first time.

Connections wise, Apple is still relying on a single Thunderbolt 3 port, which will do triple duty for data transfer, charging, and support for up to two 5K displays or four external GPUs.

The 2018 MacBook Pro comes in 15″ and 13″ configurations with the following specs:

On to that pesky butterfly keyboard, in spite of multiple class action lawsuits regarding it’s problematic design, Apple is doubling down on putting the third generation into the new MacBook Pro, and I would hope that the painful lessons learned from having to repair generation 1 and 2 versions of the super thin keyboard design, have been translated into fixes this time around. All Schiller would mention is that they keyboard is quieter, packed into its thin and light aluminum chassis. He did add, however, that the MacBook Pro has all-day battery life, the longest of any pro grade notebook of this class.
Prices start at $1799 and $2399 respectively, and are available today through Apple.com and the Apple Store. Apple is also offering a “back to school special,” to college students, parents, faculty and staff through the Apple Education Store. The promotion includes a pair of qualifying Beats headphones with purchase of any eligible Mac or iPad Pro. They also offer special  education pricing on Mac, iPad Pro, AppleCare, and other select Apple accessories.

On the eve of Halloween at today’s More in the Making Event in New York City, Apple announced the long awaited resurrection of the MacBook Air and shockingly, the redesigned Mac Mini. But perhaps the […]

Don’t Upgrade to macOS Mojave… Yet.

by Larry Jordan Within the next few weeks Apple will release the latest version of the macOS operating system: Mojave (v. 10.14). My strong suggestion is that you not upgrade any systems that you depend […]