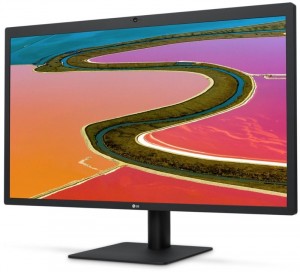 Briefly mentioned at Thursday’s MacBook Pro and Final Cut Pro X Event, Apple announced a replacement to the discontinued Thunderbolt Display. Only they didn’t make it; LG did with a little help from Cupertino. Let’s take a look. 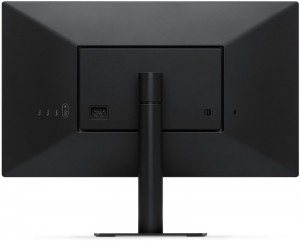 The 21.5-inch LG 5K UltraFine Display takes advantage of Final Cut Pro X 10.3’s P3 color gamut support, and drives it through the monitor’s native 5120 x 2880 resolution. With multi-stream transport, the UltraFine Display is also able to not only drive the graphics from the new MacBook Pro, but also charge it through a Thunderbolt 3 display with an 85W connection.

Other features include three USB-C ports in the back, built in stereo speakers, an HD capable webcam and microphone.

5K is, however, only available through a Thunderbolt 3 connection to the new MacBook Pro, which is due out in 2-3 weeks, but I suspect it will work with the 13-inch MacBook Pro, though probably not with extended peripherals. Cost of the LG 5K Ultra Fine Display is $1299 and it’s expected to ship in December.

If you’re not planning on investing in the new 15″ MacBook Pro right away, but still need an ultra high definition monitor, fear not, LG and Apple also have announced the 4K version of the 21.5-inch Ultra Fine Display with the same P3 color gamut support and a native resolution of 4096 x 2304. It comes with a single two way USB-C and Thunderbolt 3 connection and also can charge your devices to the tune of 60W of power. The 4K monitor also has three downstream USB-C ports, built in stereo speakers.

Apple has it available at the Apple Store website for $699, with expected shipping of 5-6 weeks.

So why is Apple deciding to abandon making their own high resolution monitors? Well that’s an good question. This new partnership may simply be to simply the Mac hardware manufacturing line, freeing Cupertino to focus more on consumer grade hardware, and letting the more higher end applications save their Pro level Macs being supported by a third-party manufacturer.

Additionally, teaming up with LG to create large screen monitors could open the pipeline to Apple and LG to create a smart TV that will rival what Roku has been doing for this year with 4K TV partnerships with Haier, HiSense and TCL.  Since the Apple Television looks to be basically dead from this point, Apple has seeded the smart TV ground to their streaming rival, instead choosing to focus on Apps and fine tune the Apple TV environment.

But that doesn’t mean the spirit of Steve Jobs final project can’t live on with the partnership that will provide Apple TV software on an Apple certified LG SmartTV. Were that to be the case, we could see Apple go head-to-head again with Roku on the TV front through a proxy fight.

I think that could be what the Unified TV Experience could end up being through AppleTV. The Central Hub concept isn’t dead, and why would it be? It’s may just end up with a different name plate.

Check out both here.