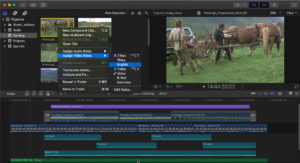 Apple updated Final Cut Pro X to version 10.4.2 last week. This is an important update because it fixed a very nasty bug in 10.4.1 that would randomly select and/or deleteclips in the timeline. The problem is that this update requires macOS High Sierra (10.13.x), while FCP X 10.4.1 did not. (The update is free and available in the Mac App Store.)

For the last several months, I’m doing all my MP4 compression in Media Encoder while Apple figures out how to get Compressor working properly. (By the way, Compressor handles QuickTime movies perfectly.)

by Larry Jordan Recently, Apple announced that it would be discontinuing support for “legacy media” using 32-bit codecs in the next major release of the macOS after Mojave. These soon-to-be-discontinued codecs were built, for the most […]

By Larry Jordan There’s a lot of confusion about when we can “import” a clip vs. a portion of a clip (called a clip “range”) into Final Cut Pro X. This thought was brought to […]