If you’re the proud owner of a 2018 Apple MacBook Pro, you know that it’s not exactly perfect. Gone are the days when Apple would have to work overtime to fix nagging issues before a product launch because Steve Jobs obsessed so much over perfection. Now it seems that Apple is now doing what everyone else does … releasing when it’s good enough, and fixing it in an update. This time around, it’s a nagging speaker issue, and a few other annoyances.

Shortly after the MacBook Pro launched, Apple had to release a July update which addressed a thermal throttling issue, that caused the MacBook Pro to run hot and get really slow. The culprit ended up being a “missing digital key” in the firmware that calibrate the MacBook Pro’s thermal management system, which was designed to slow down the processor when temperatures began to spike.

Moreover, there was that pesky butterfly keyboard, which users complained caused sticky keys, jamming and a susceptibility to dust contamination. Faced with multiple class action lawsuits, Apple agreed to repair the butterfly keyboards for free and redesigned them for the 2018 MacBook Pro. 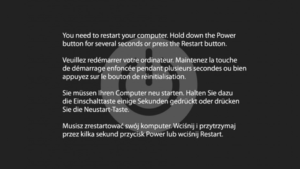 This time around, the issue plaguing owners has been “crackling speakers” and some kernel panicking. The kernel panics seem to be due to Apple’s T2 chip, which handles the secure boot up, encrypted storage, and access to Hey Siri. Until Apple could put out a fix, it was suggested that users disable FileVault and the Power Napping option to avoid the kernel panic. But the speaker issue needed a firmware fix.

Apple has put out a 1.3GB update designed to fix these issues, and while most have found it does solve the problems at hand, there are a handful that say the speaker crackling still persists and that at least one kernel panic has happened since the update. Look for the update by clicking on your Apple icon and then select “about this Mac.” Then Software Update. But like, the update has already been installed.

If you’ve applied the updates and still run into problems, Apple recommends contacting Apple Support to arrange a sending your MacBook Pro in for repair or replacement.

BTW, if you’re running the open Beta version of macOS Mojave, the fix will not be available for you unless you downgrade back to macOS High Sierra.

By Danny F. Santos (doddleNEWS) Ronald D. Moore is returning to space! Best known for reimagining Battlestar Galactica, and starting the reboot trend in Hollywood while he was at it, Moore has been tapped by Apple […]