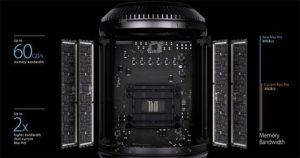 In a quick update to the press, Apple senior director of Mac Hardware Product Marketing moved to assure the professional community that not only is the next generation “Modular Mac” Pro coming, but that Apple has created a professional design and engineering group tasked with future development of the professional platform.

Explaining that the Modular Mac won’t be ready this year, Apple’s Tom Boger moved to assure that it is on track to be ready by 2019, six years after the last major Mac Pro Update. “We want to be transparent and communicate openly with our pro community so we want them to know that the Mac Pro is a 2019 product. It’s not something for this year,” Boger said.  Boger went on to add that the update announcement is to be sensitive to annual purchasing decisions that pros ned to make. There’s no need to hold off considering an iMac Pro while waiting for the ModMac to come out. The company is also looking at hiring more engineers and contracting with artists to produce media projects highlighting the Pro Mac platform. (BTW if you’re one of those, check out Larry Jordan’s article on configuring the iMac Pro for video editing here).

“There is absolutely a need in certain places for modularity. But it’s also really clear that the iMac form factor or the MacBook Pros can be exceptionally good tools.” – John Ternus

Ordinarily, I would think this is just another nail in the trash can’s coffin of being labeled vaporware, since it was supposed to be out this year. But Apple went on to add that a new division called the Pro WorkFlow Team, led by John Ternus. Ternus has a mandate of ensuring the future of the professional MacOS line by looking at all phases of Mac design culture from hardware to software and even workflows.

“We’ve been focusing on visual effects and video editing and 3D animation and music production as well,” said Ternus. “And we’ve brought in some pretty incredible talent, really masters of their craft. And so they’re now sitting and building out workflows internally with real content and really looking for what are the bottlenecks. What are the pain points. How can we improve things. And then we take this information where we find it and we go into our architecture team and our performance architects and run it to ground to get it fixed.”

Ternus added that a one size fits all Mac really isn’t the answer for today’s diverse content creation community. With a wide variety of applications from streaming to 360 video to virtual reality, Apple is trying to design a Modular Mac platform that every creator can use effectively for their genre. “The pro community isn’t one thing,” added Ternus. “It’s very diverse, and obviously they go really deep into hardware and software, pushing everything to its limit. So we need to be engaging with the customers to really understand their needs.”

“One of the good things, hopefully, with Apple through the years has been a willingness to say when something isn’t quite what we wanted it do be, didn’t live up to expectations, to not be afraid to admit it and look for the next answer.” – Phil Schiller, April 2017

And while many were expecting a Modular Mac announcement this year, Boger said that the timeline for development hasn’t fundamentally changed, just how Apple is approaching it, in the hopes of avoiding the mistakes from the 2013 “Trash Can” Mac Pro. “I think this is very much a situation where we want to measure twice and cut once and we want to make sure we’re building a really well thought out platform for what our pro customers are doing today. But also with an eye towards what they’re going to be doing in future as well.”

So, why do you guys think? Is Apple just stringing the professional community along in the hopes that they can boost sales of the iMac Pro in the short term? I doubt it. Apple has never really been that kind of company. But the reality is, as Schiller admitted in the April 2017 announcement, that the higher end Mac Pros only represent single digits of the market share. That doesn’t mean that Apple doesn’t care about the professional community, their Pro Workflow Team is proof of that. But what it does mean is that they want to be sure they’re putting the resources where they can be efficiently used. And with the iMac Pro becoming far more powerful, that may be where this all shakes out.

If you’re the proud owner of a 2018 Apple MacBook Pro, you know that it’s not exactly perfect. Gone are the days when Apple would have to work overtime to fix nagging issues before a […]

By James DeRuvo (doddleNEWS) Update: MacRumors has reported that Ming-Chi Kuo has further “clarified” his position, saying  Apple will keep the X line, but the first generation won’t become a lower cost alternative, as Apple […]