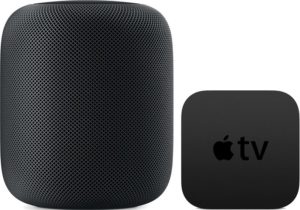 Over the years we’ve heard some pretty juicy rumors coming out of Apple. In fact, Steve Jobs used to leak phony rumors in order to track down who the leakers would be and fire them. But what do you do when the one doing the leaking is your own technology? And Apple’s new HomePod may be the best spy the tech industry has known, especially when it comes to the Apple TV.

Unfortunately, when you have a product that relies on third party developers to expand its usefulness, those developers need the operating system and samples of the product in order to write the code for their apps. So when the upcoming HomePod smart speaker was sent out to developers, one decided to dig into the firmware and see what he could find. The result is a treasure trove of information about the next generation Apple TV (known internally at J105).

According to Guilherme Rambo, HomePod’s firmware contains references to HDR10, and Dolby,as well as 4k. This is leading many technorati to speculate that the next generation Apple TV will finally hit 4K streaming, with high dynamic range and support via HDR10, is the open source standard that was developed by the BBC and NHK. 4KHDR standard being the third standard supported in the firmware.

Couple this, with references in the iTunes store of 4K streaming content in HDR, and it seems to verify that Apple has plans for ultra high definition streaming in HDR for its hockey puck sized “hobby project.” The content could also support the next generation iPhone, which has been has been supporting creating 4K video content since the iPhone 6s (and before with certain apps).

What other secrets can be found in HomePod? Well, we’re going to be talking about the iPhone later in the week, so stay tuned, as well as perhaps the Apple Watch, which may get independent cellular connections. Are we taking the next step towards a world envisioned by the comic strip Dick Tracy, where the characters “facetimed” with their video watches? That would be extremely cool and has been the main thing I’ve been waiting for.

The takeaway here is that Apple is finally going to play catch up with Roku in offering ultra high definition streaming, and going the extra mile in supporting high dynamic range.  That means that AppleTV fans who are also Netflix users will finally be able to enjoy their favorite TV shows in full 4K without having it downscaled by the weak leak in the chain.

Meanwhile, since the references are in the firmware now, it makes sense that when HomePod ships this holiday season, that a new Apple TV will be shipping right along with it. I’m betting we’ll get even more. It’s going to be a great Fall Reveal in Cupertino next month!

Adobe is partnering with actor-director Zach Braff to create a fun little contest where you create a movie poster using Creative Cloud apps, about anything you want, and if Braff likes it, it will become […]