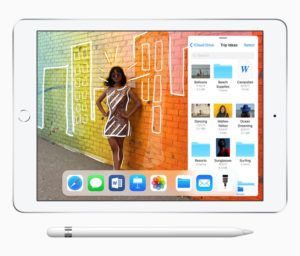 There’s an old phrase when you want to get people hooked on your product … “you gotta get em young,” and while it took Apple a few years to realize it, they’ve now created an education- centric iPad which could serve as a gateway for their electronic empire. But is it really “all that,” or just typical Apple style at a slightly lesser lower price tag?

The basic idea behind the 9.7 inch iPad, is that it comes with an Apple Pencil and an updated A10 processor. Outside of that, it’s pretty much your garden variety iPad. There is a modest 10 hours of battery life, an 8 megapixel rear camera for 1080p HD video, HD FaceTime camera, and optional LTE, so that’s pretty good. Unlike its cousin, the iPad Pro, however, it doesn’t have the True Tone color gamut, and there is a pronounced air gapped bezel around the screen indicating a cheaper display. Understandable though, since you have to cut some corners if you’re going to try and make a “budget” product that schools can afford to buy in bulk.

But here’s the thing. Apple wants to position this new iPad as an alternative to Chromebook, which have had great success in the educational market. My son, for instance, has been using Chromebooks since grade school, all the way to high school. They’re everywhere and they’re not only cheap, but linked to Google Docs for storing all his daily work. The problem that Apple has here is that this $329 iPad doesn’t come with any smart keyboard option. 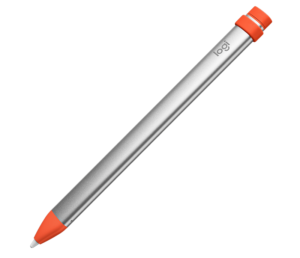 It’s just an updated iPad coupled with an Apple Pencil for $329. Schools are essentially getting Apple Pencil for free. Apple also introduced a Logitech “Crayon,” for $49 that’s designed to work in a similar fashion to the $99 Apple Pencil, so you can save another $50 there. That’s nothing to shake the proverbial stick at, but schools can still get a Chromebook for far less.

Apple also announced a smaller, 7.9″ iPad mini 4, with slower A8 chip. But the rub there is the advertised price is $399. That’s $70 more than the iPad/Apple Pencil combo, and it’s smaller, slowerand it doesn’t support Apple Pencil or the Logitech Crayon.  Then there’s the repairability factor. iFixIt gave last year’s model, which this educational iPad is based on, a repairability score of 2/10.  A comparable Chromebook, by contrast, is rated at 9/10. It’s a given that kids are hard on equipment, especially electronics, so if you’re a cash strapped school district, and you’ll need a device that can be easily repaired when a kid drops it, what are you going to want? Add to the fact that most modern Chromebooks can now support Android apps and I think it’s advantage Google.

I really can’t see this iPad being good for every classroom, maybe good for art class, where supplies are always in need for underfunded programs. And for giving kids the tools to lay a foundation for storyboarding and other artistic applications, I can really see the advantages of this as an entry level sketching device.

But this is aimed at giving kids and teachers tools for education.

Software wise, Apple introduced a new “Schoolwork” app that uses ClassKit framework to make it easier for teachers to keep attendance and send class assignments directly to students’ expanded, 200GB iCloud accounts. That’s a good option, but teachers will have to live in the Apple ecosystem to use it. Apple also announced an initiative called “Everyone Can Create,” which showcases the new iPad as the ultimate creative tool for kids, with apps that focus on four areas – music, video, photography, and drawing. Those tools are sure to help kids who want to become the next great YouTube or Instagram star. And hey, we have to get the next generation of filmmakers started somehow. Apple would be well served to provide an iOgrapher grant to schools so that they can shoot some solid video rather than shakey footage holding a huge iPad.

I’m certain Apple will ensnare some schools with their siren song, and at least we know that Apple’s educational tools will do the job (although the age old Apple mantra of “it just works” has died a cruel death with the latest iOS updates of late). Consequently, though, it comes at a price that could have been better. I’m betting that smarter school districts will probably stay put with Chromebooks and Google Docs. They just won’t feel as cool.

By James DeRuvo (doddleNEWS) In today’s doddleTALKS Tech… It’s been a busy month for technology, especially for filmmaking.  From the iPhone 5 to RED’s latest Meizler Module, to Magic Lantern freeing the Canon 7D.  And […]

By James DeRuvo (doddleNEWS) Over the years we’ve heard some pretty juicy rumors coming out of Apple. In fact, Steve Jobs used to leak phony rumors in order to track down who the leakers would be […]

That’s the scuttlebutt anyway. Apple’s “More in the Making” event on Tuesday, Oct. 30th seems to focus a lot on artistic interpretation, and that is leading many to think that it will showcase new iPad Pros […]