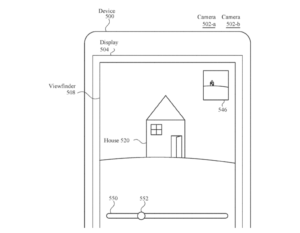 When Apple announced Portrait mode on the iPhone 7, I knew it was only a matter of time before that feature would eventually expand to video applications. Recently, Apple watchers noticed that Cupertino may have a new way to record video from both lenses at the same time. Is this a new feature, or will video on the iPhone finally get the bokeh it deserves?

An electronic device has multiple cameras and displays a digital viewfinder user interface for previewing visual information provided by the cameras. The multiple cameras may have different properties such as focal lengths. When a single digital viewfinder is provided, the user interfaces allows zooming over a zoom range that includes respective zoom ranges of both cameras the zoom setting to determine which camera provides visual information to the viewfinder and which camera is used to capture visual information. – Abstract from Apple’s patent application for “to record with both the wide and zoom lenses on a device.”

The news comes from a 71 page patent application by Apple covering the ability to record from both cameras simultaneously is an interesting one, because it does lend itself to at least the possibility that engineers at Infinity Loop have finally been able to make a processor that can apply portrait mode to video, and that it allows the user to zoom over the zoom range of both cameras, in a mix of optical and digital zoom which transitions from one camera to the next. 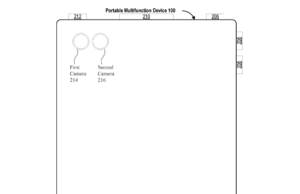 But it may also be dual recording in 1080p, using the 4K capability of the iPhone’s camera to grab two different camera angles at the same time.  Because 4K offers 4 times the resolution of 1080p, the ability to create several different camera angles from one master 4K image is a popular post production trick. And that could be what Apple wants to do, but from it’s dual camera array.

I think this is more likely, rather than having portrait mode in video. But it also opens up some interesting possibilities for split screen, multi camera shooting, and just about anything else the iPhone camera can do with the new software architecture. And the more powerful the next generation A series processor Apple uses in future designs, the more it can do.

Oh, and there’s something else you can find if you look carefully at the patent application. It looks like there may be a return of the headphone jack, as the patent drawings include it the design, the dual cameras are once again arranged in a horizontal array. The SIM card has also been moved to the top middle of the phone, rather than the side. I sure wish that was a microSD card instead, but then Apple wouldn’t sell as many 256GB iPhones, would it?

Anyway, it may not be portrait mode in video, but the future of mobile filmmaking is going to get more interesting in the future with new options for shooting video, live streaming, and more.

By James DeRuvo (doddleNEWS) With live streaming video now being able to focus on high dynamic range in 4K, the need for more accurate color grading is paramount. There are plenty of apps out there […]