On the eve of Halloween at today’s More in the Making Event in New York City, Apple announced the long awaited resurrection of the MacBook Air and shockingly, the redesigned Mac Mini. But perhaps the biggest surprise, was that Apple is moving away from the lightning connector, adopting the standard USB-C connector on the new iPad Pro.

Apple’s Tim Cook wasted no time, and hit the ground running to announce a new MacBook Air with a liquid retina display. 17% smaller, 10% thinner and weighing at just 2.5 lbs, the top of line MacBook Air comes with an Intel Dual Core i5 processor, up to 16GB RAM, and a 1.5 TB SSD. The bezeless Liquid Retina display is 13.3″, has a resolution of 2660×1600 and 14 million pixels. 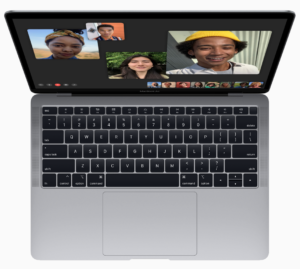 Other features include a backlit Butterfly 2 keyboard, ForceTouch trackpad with haptic feedback, 2 Thunderbolt 3 USB-C ports, 12 hour battery life, and also Touch ID with Apple’s secure T2 security chip.  But what I found interesting is that Apple decided to skip the TouchBar on the MacBook Air, even there is Touch ID.

But perhaps the most interesting feature, is that Apple is using 100% recyclable aluminum in its unibody construction, making it the greenest Mac Apple has ever made. This green initiative also sets the tone for the products coming next.

C0st of the MacBook Air starts at $1199 for the 8GB version with pre-orders beginning today, shipping November 7th.

For the last four years, the rumor mill has been saying that Apple was going to refresh the MacMini, only to be disappointed year after year. So when the scuttlebutt was that Cupertino would once again resurrected the Mini, I gave it the usual eye roll. But I was pleasantly shocked to see that this year, the rumor mill got it right!

With either a four core i3 3.0 gHz or or six core 3.6 gHz i5 processor, the new Mac Mini is rated five times faster than the previous model. This new Mac also offers something no one really expected, up to 64GB 2666MHz DDR4 RAM that’s upgradable, and an all flash SSD of up to 2TB. 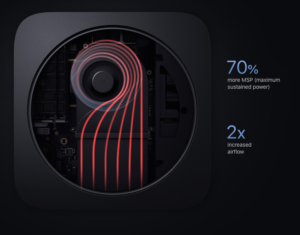 Looking at the space ship like video above, we also see that there’s a lot of lessons learned from the cooling designs of of the iMac Pro, that provides twice the increased airflow with 70% more power performance. And with a circular entry slot that can give users the ability to upgrade the RAM as they need. 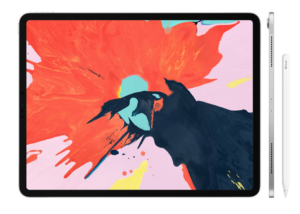 Finally, a newer, smaller iPad Pro was announced, but with a larger screen and a bezel less design. With over 400 million iPads sold to date, Tim Cook says that there were more iPads sold this year, than the entire sales figures of all laptops put together. That makes it the most popular mobile computer in the world.

The new iPad Pro is completely redesigned with the latest in Apple performance features that include an edge-to-edge Liquid Retina display, Face ID, and an eight core A12X Bionic chip which is more powerful than 90% of most i7 laptops. 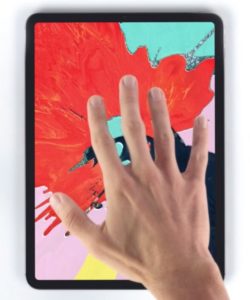 The new iPad Pro comes in an 11″ and 12.9″ models, but thanks to its rounded edge design, the iPad Pro is exactly the size of an 8 1/2 x 11″ piece of paper but with 25% less volume.  There’s also a 7 core GPU, and in perhaps the most stunning design change, Apple has dumped the lightning connector for Type-C. This gives the iPad Pro the ability to offer charging out, so users can connect their iPhone or other external device and power it directly. Of course, that also means a new cable, which I’m sure Apple fans are annoyed, but used to by now.

Also notice that the new iPad Pro doesn’t have a Home Button, choosing to go with Face ID. But here’s an interesting wrinkle. There’s NO NOTCH. And users can log into the iPad Pro from any orientation.

Other features include four pairs of woofers and tweeters for each corner, to offer quad stereo sound, support for augmented reality through AR Kit 2, and magnets ringing the entire design to connect to the Apple Pencil 2. In fact, the iPad Pro will not only adhere the pencil, but it will automatically connect it via bluetooth and charge it wirelessly.

Apple brought a representative from Adobe on stage, who talked about how the new iPad Pro can not only handle a fully ported version of Adobe Photoshop, but it can do it with up to 157 layer and 12,000 x 12,000 pixels. Photoshop can also run with all eight cores at once. Adobe Photoshop on the iPad Pro will be available in 2019. Not only that, but the iPad promises to handle everything from sketching, to video editing, to gaming at 120 fps. That’s some serious firepower. And it also uses recycled aluminum. Why the push for green? Well, don’t discount that Apple is looking to make it’s way around the latest round of tariffs on alloy imports.

The new iPad Pro starts at $799 for 11” 32gb version. $999 for 12.9” 64GB. Preorders today. Ships Nov. 7th. There were no announcements of updates to the iPad mini or conventional iPad. Also missing was the now vaporware-esque AirPower Qi charging board, which Apple gave a sneak peak of last fall. It was supposed to be out by now, but rumor has it, Apple is having issues with the design overheating when used with multiple devices.

Lastly, Cook announced that an update to iOS 12 would be available today, that brings group FaceTime chat to all iOS devices.

So, what interests you? Are you going to upgrade to any of these? Any plans to edit a feature on your an iPad? For me, I have to say that the most exciting is the Mac Mini. I love the idea that you can daisy chain them for high performance applications.

Check out all the other details at the Apple Store or at Apple.com.

Doddle Digest: Game of Thrones, The Meg, Lord of the Rings, & Foundation

By Danny F. Santos (doddleNEWS) This week is all about novel adaptations! Seriously, there’s a ton of news about books being turned into movies and television series this week that I have to wonder if […]

UPDATE: Larry has been bench testing his configured Mac Mini, and has updated his initial tutorial to reflect what he has learned. You can read it here. by Larry Jordan Last week, Apple announced upgrades […]