The headline feature is Workflow Extensions. Similar in concept to plug-in panels in Adobe Premiere Pro CC, these extensions allow 3rd-party developers to add functionality directly in Final Cut. For example, dragging assets directly from the extension into the timeline or browser.

Extensions open directly in the interface without the need to launch a separate app or browser. They are designed to match the look of Final Cut Pro for a native experience with third-party tools. And extensions integrate tightly into the features of Final Cut Pro, allowing you to drag clips or projects between the extension and your library, navigate your timeline, and more.

Launching this morning with the FCP X update, are workflow extensions from Frame.io, Shutterstock and CatDV. 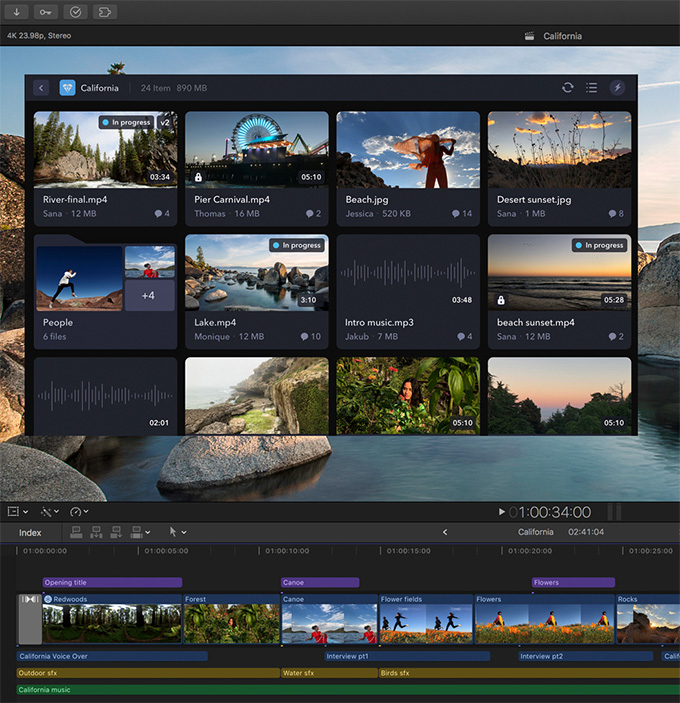 (The new Frame.io workflow extension, floating at the top.)

“Frame.io in Final Cut Pro X enables editors to … track progress, review work with teams, respond to comments and annotations, and even batch upload and download content,” explains Emery Wells, co-founder and CEO of Frame.io. “…Having these tools within Final Cut Pro X means they’re not switching context to collaborate with their team or partners. They’re able to iterate very quickly on projects and stay focused on evolving their creative vision.” 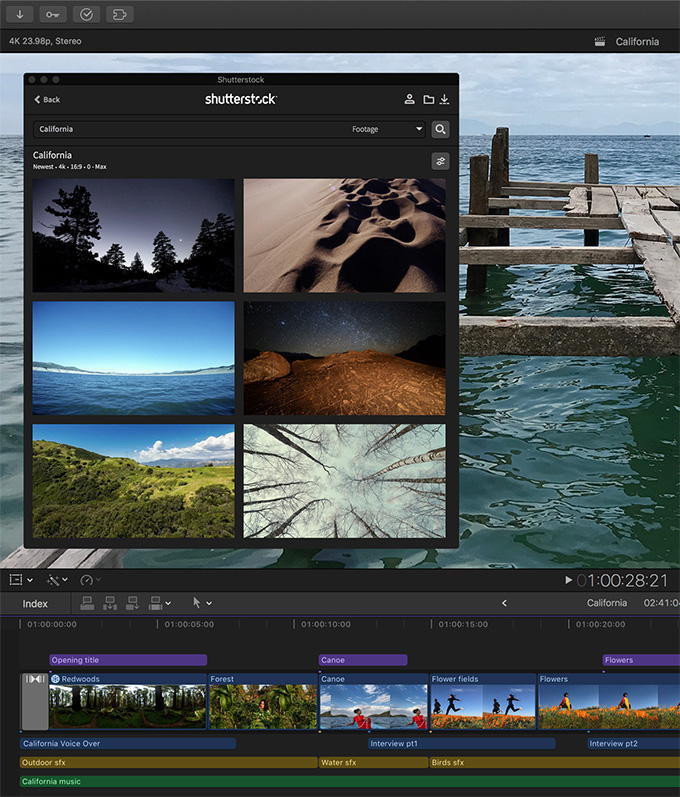 (The new Shutterstock workflow extension, floating at the top.)

The extension also enables users to preview content by adding watermarked video, images, and music to their Final Cut Pro X project and then easily replace them with licensed, high-resolution assets at any time. The extension supports the same 21 languages supported by the Shutterstock site. It also supports the same pricing plans across all assets. Users without an existing Shutterstock account can create one directly within the extension.

Workflow extensions can be downloaded free from the Mac App Store starting today. Additional third-party extensions for Final Cut Pro X will be available on an ongoing basis. These workflow extensions are supported by an Apple API and SDK, which is available to all interested developers by contacting Apple Developer support. 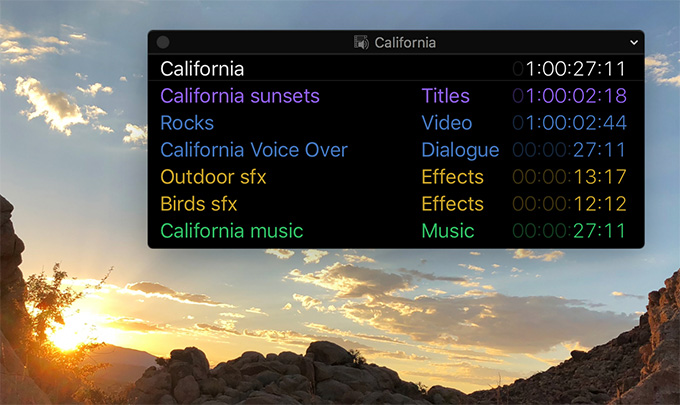 As usual, I recommend never updating in the middle of a project. Finish the project, then update.  Also, there’s no harm in waiting a few days to make sure there are no hidden bugs in this new version. Let others not under a deadline test the product. Once you know the software is good to use, feel free to update.

I’ll have tutorials and more coverage on these new features on Monday in my weekly newsletter “Edit Smarter, with Larry Jordan.”  Click here to register.

Bookmark the permalink from LarryJordan.com.
About James DeRuvo 801 Articles
Editor in Chief at doddleNEWS. James has been a writer and editor at doddleNEWS for nearly a decade. As a producer/director/writer James won a Telly Award in 2005 for his Short Film "Searching for Inspiration. James is a recovering talk show producer from KABC in Los Angeles, and a weekly guest on the Digital Production Buzz with Larry Jordan.
Website

This week on the Buzz, we cover a range of topics from cosplay to color grading to archiving. Plus, the latest changes in workflow, codecs and technology. Join host Larry Jordan as he talks with […]

By Larry Jordan (This article was suggested by Fairlie Arrow.) Fairlie writes: “I always have issues with adding fades and other transitions between compound clips in FCPX, especially at the heads, not so much the […]