Today’s Apple event had several cool new announcements and features for both the Apple Watch and iPhone Xs that some will find interesting. Problem is, from a mobile filmmaking point of view, with Apple spending a total of 2 literal minutes talking about features (one being a video), there really isn’t a lot there.

I’m not going to spend a whole lot of time talking about the Apple Watch, since there’s no benefit to buying a Series 4 for the mobile filmmaker. If you want to know about them in detail, head on over to our official Twitter feed, where I live tweeted the details as they were announced.

I will say this though. Frankly, without going into full Dick Tracey mode (FaceTime), I don’t really see a need to upgrade.

Having said that, the Series 4 Apple Watch is a great looking watch with an edge to edge display, and some great health features. Those new heath features include a new fall detection mode, which will notify your emergency contacts if it detects you’ve fallen, and the ability to take an electrocardiograph directly from your wrist. So, if you have an elderly loved one, or are dealing with a heart issue, you’re going to want to look into the Series 4 Apple watch. It could be a life saver.

Both have a Super Retina OLED screen, a million to 1 contrast rate, and wider dynamic range that translates into support for watching video in HDR10 and Dolby Vision. Under the hood, the iPhone Xs has a 6 core, 64 bit A12 Bionic processor, 4 core GPU, and is 50% faster. Gamers are going to love it.

Apple is also interesting a new dual SIM standby mode with the iPhone Xs, where users can have two phone lines with a single phone. It uses Apple’s newly developed eSIM feature, which creates a virtual SIM for the second line, and it’s being supported by all the major carriers. For China only, the iPhone XS Max, will have two physical sim card slots. So if you want to have two separate phone lines, your prayers have been answered.

As far as the camera goes, Apple has improved the dual 12MP cameras and incorporated an improved quad LED True Tone flash. The real power is in the camera software, where Apple has improved bokeh in portrait mode. There’s also a new depth slider to adjust the depth of field. from f1.6-4.4, after you’ve taken the picture, so you can adjust the depth of the background to your liking. It’s very light field camera like stuff.

And while the camera sensor is twice as fast as before, the main improvements for shooting video aren’t necessarily in the image quality. It’s more audio. The iPhone Xs has a wider stereo field, which can not only play home theater quality sound, but can also record in it thanks to the four on board microphones.

Next comes the iPhone XR, which marks the return of multiple color, ala the iPhone 5c! Essentially an iPhone Xs with an LCD screen and a single camera, the iPhone XR comes in white, black, blue, coral, yellow, (R)ed. It’s a bigger 6.1″ liquid retina LCD screen, but smaller in the hand than the iPhone 8 plus. And it has FaceID, so bye bye home button. 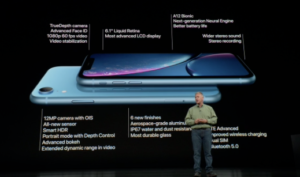 Another interesting feature of the iPhone XR is that it comes with portrait mode, even though it has a single 12 mp camera. Apple has figured out a way to do computational photography on that single portrait image, and provide bokeh to the background and to adjust the lighting.

It’s a great breakthrough in software, but what annoys me is that they didn’t work to bring bokeh to video. Perhaps it’s still too computationally intensive to do with the moving image. But still …

Really, that’s about it. So, if you skipped the iPhone X because of it’s $1,000 price tag, in the hopes that the iPhone Xs was going to be better, I guess an argument can be made for your patience being rewarded. But if you bought the iPhone X last year and are wondering if you should spend the money again to somehow make your mobile film quality better, then I would say no. Sure, you can record in stereo, but if you’re into mobile filmmaking in any serious fashion, you’re already connecting a microphone to your iPhone anyway. So, the only real feature I can see for an upgrade is that the iPhone Xs and Xs Max has a 512GB model.

Oh, and if you’re waiting to upgrade to macOS Mojave, the OS will officially ship on September 24th. But follow Larry Jordan’s advice and wait a few weeks to see what problems creep up and give software providers a chance to upgrade to it.

by Larry Jordan With the release of macOS Mojave (10.14), Apple is continuing its conversion to 64-bit applications that it first began many years ago. Surprisingly, this conversion also affects older media codecs which are […]

By Larry Jordan (doddleNEWS) Apple updated Final Cut Pro X to version 10.4.2 last week. This is an important update because it fixed a very nasty bug in 10.4.1 that would randomly select and/or deleteclips in the […]