Shooting large format has been the hallmark of ARRI’s ALEXA camera platform these last few years, and with such a vast cornucopia of ALEXA cameras to choose from, is it any wonder that ARRI has led the field in awards nominations year after year? Well, they’re at it again, creating a compact, ARRI ALEXA Mini that comes with an ALEXA LF large format sensor.

“The ALEXA Mini LF is a fantastic addition to our large-format system and will complement the ALEXA LF, rather than replace it. The ALEXA LF is a great high-speed camera, which is especially important for commercials, where 150 fps in 4.5K resolution and full image quality is important. It is, in fact, how an ARRIFLEX 435 still complements an ARRICAM on set. With the addition of the Mini LF we now have an answer for all shooting requirements.” – Stephan Schenk, Managing Director of ARRI Cine Technik and responsible for ARRI’s Business Unit Camera Systems 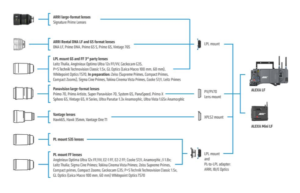 Based around the 4.5K ALEXA LF Sensor, the ALEXA MINI LF offers twice the resolution as standard 35mm ALEXA cameras, with what ARRI calls the highest dynamic range of any camera in its class. Though they stop short of telling us how many stops of DR the Mini LF enjoys. In addition, the Mini LF enjoys a trio of internal motorized FS ND filters, a 4″ flip-out high contrast MVF-2 HD viewfinder, ARRI LPL/PL Lens mounts, and supports the Codex Compact Drive at up to 1TB in size.

Other hardware enhancements include extra connectors for 12v and 24v power, a 6 pin audio connector, two built in microphones, and improved WiFi connection. There are also a series of  six customizable user buttons to fine tune your own personal camera settings, along with VF and TC connections. 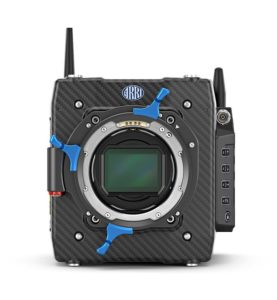 The 1TB Codex Compact SSD drive makes the ALEXA Mini LF the first to use these small and affordable media drives for image storage.  The included compact drive adapter can be connected via USB-C without any additional licenses, and supports both Mac and Windows. The added benefit is that Codex’s High Density (HDE) recording offers file sizes 40% smaller and can still maintain that lossless look of ARRIRAW. “HDE is free-of-charge for use with Codex Capture or Compact Drives, openly shared, and fast,:” the Press release states. “ARRIRAW Open Gate 4.5K can be encoded at 24 fps on a modern MacBook Pro.”

Creating yet another ALEXA camera platform clearly shows why ARRI continues to dominate the industry, especially during awards season. There’s now practically an ALEXA for every single cinematic use, and the smaller form factor in this large format model is bound to get great use, especially for commercials and indy projects. It’ll be fun to get some hands on with it at NAB in a few weeks.

No word on pricing yet, but the ARRI ALEXA Mini  LF is scheduled to ship by summer, 2019.  For more information visit: www.arri.com/alexaminilf

By James DeRuvo (doddleNEWS) The comforting thing about the digital revolution, is that a great deal of cinema camera technology, like 4K, high frame rate, and camera tools like false color, have trickled down to […]

By James DeRuvo (doddleNEWS) Once again, ARRI can claim the top vote getter amongst cinematographers in this year’s Academy Awards race. But the surprise was that the ALEXA Mini was a very popular choice within […]