ARRI has announced that it has finally completed development of their new SXT Camera platform design, and are now ready to begin scheduling upgrades of ALEXA cameras bought during the last two years. 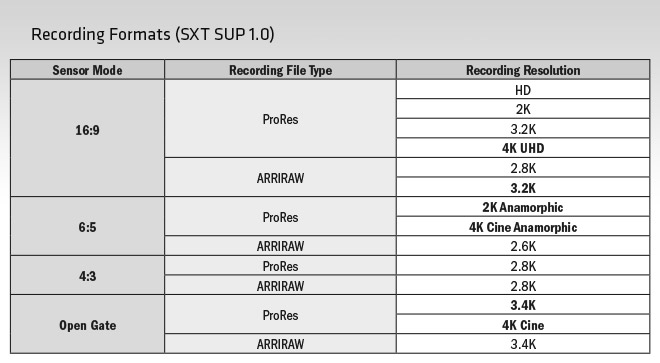 Designed to improve color, image quality, and give support for HD-SDI output, the SXT line is the next step in ARRI’s evolution of the ALEXA design. Centering around ARRIRAW or Apple ProRes as its chief 4K codecs, the SXT system will record not only at 3840 x 2160 to 4096 x 2637, but also manages to also add high dynamic range features like recording in Rec 2020 or Rec 709, using 3D LUTs, and even monitor via up to four outputs in HDR.

The interesting thing is, ARRI says it can do it using the same 3.2K sensors deployed in the ARRI XT line. It’s probably able to harvest more information from the end to end real estate of the original sensor, rather than having any kind of crop.

“The method by which we achieve the ProRes 4K recording is no secret; just like in the ALEXA, we do a mild up-sample,” said ARRI camera systems product manager Marc Shipman-Mueller. “Now that we have the very powerful ALEXA 65 electronics available, we can easily do this in-camera.”

ARRI has promised the full upgrade to all XT cameras including the ALEXA XT EV, ALEXA XT Plus and ALEXA XT Studio that were purchased and shipped between 2015 and 2016. Shooters who have bought their XT cameras before this time frame, can still pay for the upgrade option as well, but I’m guessing they’ll have to wait until the original camera users upgrades have been fulfilled.

But that may take less time than previously thought. Originally, the upgrade program was going to be localized in Munich Germany, prompting the need for users to ship their cameras to the ARRI main facility to be upgraded. But ARRI has since expanded their program by providing training, tools and support for service locations in London, Los Angeles, New York, Beijing, Hong Kong and Mumbai.