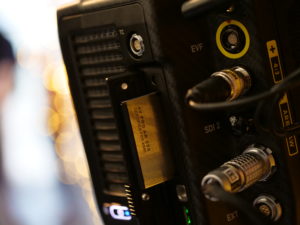 As Photokina continues its march through the week, ARRI grabbed headlines by teaming up with European media card maker Angelbird to create the ARRI AV Pro AR256 CFast 2.0 Card for select ALEXA and AMIRA cinema cameras.

“Many of the CFast cards we tested delivered good results, but it usually takes the manufacturers a few attempts to stabilize their performance for high data-rate write patterns,” says Oliver Temmler, Product Manager for Storage Media at the ARRI headquarters in Munich, Germany. “Angelbird really stood out—they listened to us closely and quickly determined which parameters they had to tweak.”

Designed specifically to take advantage of the ALEXA circuitry and hardware, the AV Pro 256GB CFast 2 card offers stable recording, heat dissipation, and can keep up with ProRes and ARRI Raw codec recording.  Angelbird designed the AV Pro Cards with thermally inductive material, which has been undefiled to provide proper heat dissipation from the camera’s chips and other electronic components, assuring that data written to the  card is secure and stable while writing to the card. “The result is a rock-solid 256 GB CFast 2.0 card, with super-stable recording performance all the way across the storage space,” ARRI says, “making it the perfect addition to an ALEXA Mini or AMIRA camera setup.”

You may not be aware of Angelbird Technologies, the company is known throughout Europe for their manufacturing of recording and storage media for the professional content creation market and entertainment industry. Their product catalog ranges from SD, CFast and SSD Card media, as well as the hardware deployed to connect them for post production and archiving.

The AV Pro 256GB CFast 2 card is certified by ARRI to use with ALEXA Mini and AMIRA camera systems, but there are no plans to expand the certification to ALEXA XT, SXT, and LF lines. There’s no word on pricing, but the AV Pro 256 CFast Card is now available through ARRI and it’s authorized sales channels.

For locations and more information please visit www.arri.com. The complete line of Angelbird products can be found at www.angelbird.com.

ProGrade Digital will not support XQD Memory Cards for Nikon

By James DeRuvo (doddleNEWS) ProGrade Digital came to fill the void left by Micron’s closing of the Lexar media card division. Lexar was a popular choice for media cards because they were fast, high performing, […]

By James DeRuvo (doddleNEWS) The comforting thing about the digital revolution, is that a great deal of cinema camera technology, like 4K, high frame rate, and camera tools like false color, have trickled down to […]