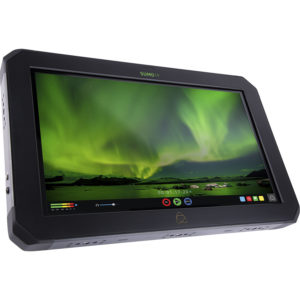 Atomos recently announced the has updated the firmware of its popular new SUMO 19″ field monitors. The new firmware promises some cool new features and some housekeeping tweaks to keep  their large screen recorder, and the Sumo M reference monitor humming along. But what’s inside it? Let’s take a look.

“The Sumo has been out for a month now and has been really well received. So we’re broadening the family with the Sumo M. The future firmware update at the end of the October will take in four separate 1080/60 feeds and do live switching. Then early next year, you’ll be able to record all four.” –  Tony Trent, Atomos General Manager

Atomos says that since they launched the SUMO at NAB, they’re starting to see that crews are using the Sumo for everything from lighting, to focus pulling, to record and playback. “It’s a real game changer for what we’re seeing on set,” says Atomos. And it’s easy to see why judging from the specs. From a massive 19″ IPS HDR touchscreen with 1200 nits of brightness, to its ability to record 12 bit Raw in 4K or 10 bit 422 ProRes the Atomos Sumo also has Quadlink SDI inputs and records to standard dual 2.5″ SSD drives.  Other specs of the Sumo recorder include:

The Sumo M, by contrast, is the same large 19″ IPS screen that supports HDR except that it doesn’t have an external recorder. It’s a pure switchable video field and reference monitor ideal as a secondary, backup for client and crew observation. It’s also about $500 less than it’s “big brother.”

Additionally, Atomos will also be make it easier to upload HDR content directly to YouTube without having to re-encode the Log footage and add metadata to display in HDR. The new update will give the Sumo the ability to convert to PG or Hybrid Log Gamma (HLG) stands in real time from the recorder directly. The clip can be uploaded without any further preparation. “The time for HDR is clearly now, with this week’s announcements of the iPhone X and Apple TV 4K, plus new 4K HDR devices being announced every day,” added Atomos CEO Jeromy Young. “HDR content is going mainstream. Our new end-to-end workflow with YouTube output makes HDR accessible to all.”

RED is getting into another partnership for use of their codecs and workflows, this time with a deal that will bring their Raw codec to bear on Atomos line of high end external monitor-recorders. Effectively […]

By James DeRuvo (doddleNEWS) From deep Down Under, Atomos has once again updated the firmware for their Ninja Inferno and Shogun Inferno External monitor-recorders, bringing with it expanded 4K HDR recording capability plus other features for the Panasonic Varicam LT cinema camera. Our goal at […]