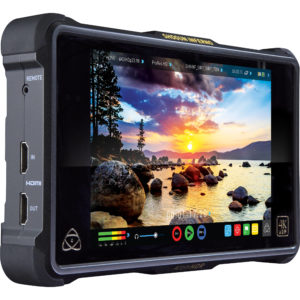 From deep Down Under, Atomos has once again updated the firmware for their Ninja Inferno and Shogun Inferno External monitor-recorders, bringing with it expanded 4K HDR recording capability plus other features for the Panasonic Varicam LT cinema camera.

Our goal at Atomos has always been to bring the most up-to-date technology through new efficient ways to work. This gives every video professional more time for creativity,” said CEO Jeromy Young. “Getting HDR to screen used to be a complex task that required specialist knowledge. With our latest enhancements, the process of monitoring, viewing, recording and delivering HDR is now simple and straightforward for the first time. I’m sure users will be stunned with the results, especially to standard SDR TVs with HLG.”

Through the free AtomOS 8.4 update, the Atomos Shogun and Ninja Inferno will now support Hybrid Log Gamma (HLG) for the Panasonic Varicam LT along with bringing 4K 12-bit CDNG Raw and 2K recording at up to 240 fps via Atomos Raw-to-ProRes technique.

All metadata is also retained through tags, whether from Apple ProRes or AVID’s DNxHR streams, making it just as easy to to use in an end-to-end workflow as in Rec 709. And if your NLE supports HLG, you will be able to edit the clips natively without the need to transcode.

“I’m delighted with what Panasonic and Atomos have achieved working together,” Young added. “The Varicam LT and Shogun Inferno was already a great combination, but the enhanced feature set of AtomOS 8.4 with 240fps brings you a new camera performance standard at the same price.”

From there, users can also output directly to YouTube with full HDR support, a feature that the streaming media giant recently activated that takes advantage of the metadata tags for support. End users will also be able to play out full HDR via Google’s Chromecast Ultra and Amazon’s FireTV.

Atomos also offers HDR Flag support for gamers who are using Inferno recorders to live stream their game play from video game consoles like the PS4 Pro and XBox One X. This is an interesting move that shows that live streaming so-called “lets play” videos has become quite a popular programming choice for millennials, who eschew watching television in favor of live streaming on YouTube and Amazon’s Twitch Network.

The free AtomOS 8.4 firmware update is available for download now at www.atomos.com/firmware

Will XQD Media Cards Thrive in an 8K Future?

Since Lexar died last year, only to be reborn in its phoenix like glory this year, the XQD media card format has undergone a kind of Renaissance. Not only is Nikon offering its own brand […]

With the retirement of owner and CEO William Meurer, the venerable cinema rental company Birns & Sawyer is set to have an inventory auction of surplus rental and sales inventory. “After many storied years, we […]