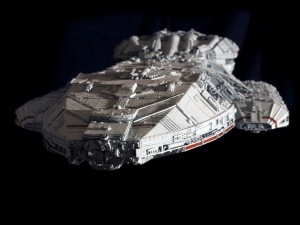 Universal has been planning a new Battlestar Galactica film for the past few years, and it has finally moved one step closer to production.

According to Deadline, the studio has hired Lisa Joy, who is executive producer and penned the upcoming HBO series Westworld, to write the screenplay for the upcoming film adaptation of Battlestar Galactica. Meanwhile, Hunger Games: Mockingjay – Part 2 director Francis Lawrence is in talks to direct the film. Scott Stuber and Dylan Clark of Bluegrass Films are producing along with Michael De Luca through Michael De Luca Productions.

There are no details on the story, but with the original series’ creator Glen Larson having passed away in 2014 and the TV remake’s showrunner and producer Ronald D. Moore nowhere to be seen, it is pretty safe to say that this will be another reboot. I’ll go out on a limb and assume that both the classic series and the remake series fans will be none too pleased with a possible film taking place outside both of the iconic shows.

I will find it ironic if fans of the the remake end up in arms over this film, since the 2003 series made huge changes to the original concept that included gender swapping several characters and creating entirely new characters. For original series fans, well, this will be the second time they would be disappointed.

The original Battlestar Galactica was a series I discovered through a clip on a documentary about science fiction television and films back in the 1990s. I wasn’t born during the original run, but I was able to rent many VHS copies of the series plus read a few novelizations… Heck, I even watched Galactica 1980.

When the early 2000s re-imagining was announced I didn’t care for it too much, but I gave it a fair chance. Since then, it has become one of my favorite television series of all time.

Both the original and reboot are very different series in tone and pretty much sit at opposite ends of the space opera spectrum. If Universal gets a big screen version off the ground, expect it to match the tone of Guardians of the Galaxy and Star Wars rather than the dark, complex version of the reboot. That would put it in line with the original Larson series but I hope the new film will lose the campy aspects.

Personally, I have no problems with this. The reboot wrapped up its story in a satisfactory way, and any attempts to revive the series with prequels like Caprica and Battlestar Galactica: Blood and Chrome haven’t really worked out. A new film version that’s separate from both TV series is what Universal hopes will be a hit at the box office.

Universal is trying its hand at a multi-film universe with the classic monster movies, and now it seems they’re trying their hand at a Star Wars film series with Battlestar. I wouldn’t mind a series of films that re-explores the concepts that Larson created more than 38 years ago, but there’s no word the direction the studio and writer will go.