The video quality of the Blackmagic Pocket Cinema Camera 4K is fantastic. Hands down, an ideal platform for taking the next step. But the camera’s battery life, not so much. So, after nearly a year of complaints of the abysmal battery life in the BMPCC4K, Blackmagic has released a firmware update, to better manage its power consumption.

“This update is exciting because it adds even more great new features to the camera and it’s an exciting way for us to say thank you to all the people who have purchased a Blackmagic Pocket Cinema Camera 4K and who have taken the time to discuss ideas for the future with us.” – Grant Petty, CEO Blackmagic Design

As part of Camera Setup 6.1, Blackmagic has announced improved battery life monitoring and management, which the company says addresses a common issue that caused the camera to shut down prematurely, even though the on screen estimate indicated up to 40% available battery life.

According to Blackmagic, the camera hasn’t been properly estimating the actual battery power left in the camera, giving users a false indication that there in enough power to shoot a shot. While it’s great, to have a more accurate estimation of your available battery life, if the battery is quickly depleted, it really doesn’t address that the camera sucks your battery power like a vampire on a feeding frenzy. 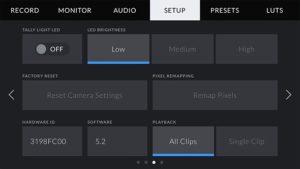 Consequently, that has also been addressed, as Blackmagic adds that Camera 6.1 better manages camera assets to make battery efficiency better than ever before. But only time will tell what testing will yield, however every little bit is more than welcome for BMPCC4K users, that’s for sure.

Moreover, Blackmagic has also included a pixel remapping feature, which enables users to recalibrate pixels, which may change in brightness and create small variations across the sensor over time. The new pixel calibration feature allows the camera to realign the light output of each pixel resulting in a smooth clean image under changing environmental conditions.

Camera 6.1 is only addresses improvements to features the Pocket Cinema Camera 4K, no other models. To download, head over the Blackmagic Support site here.

By Jame DeRuvo (doddleNEWS) Sony has revised their mid term strategy with plans to invest more than $9 billion in the next three years on next generation image sensors. With the goal of becoming the […]

By James DeRuvo (doddleNEWS) When you work as the DP for the Mythbusters, you’re going to have a few broken cameras. That’s the subject of today’s doddleTALKS Tech, as I interview Scott Sorensen, who got […]