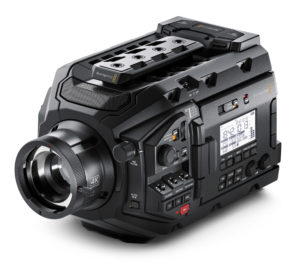 Firmware updates aren’t always for new features, they can also be about cleaning up the interface and improving existing feature performance. With the URSA Broadcast Camera 5.0.1 firmware update, Blackmagic does a little of both.

On the software side, Blackmagic has made Windows 10 support better by fixing a driver issue that prevented it from being loaded upon app start up, which would cause issues with importing URSA files into PC based editing systems, plus removing the limitation that only allowed the loading of 3 custom LUTs at a time. Users can now load an unlimited amount.

Camera Update 5.0.1 does not make any improvements for any other Blackmagic cameras or studio peripherals. Here’s more information on how to install it for URSA Broadcast Camera users:

Before installing the software on Windows, we recommend that you run “Uninstall Blackmagic Camera Setup” first.

While installing Camera Update on URSA Mini and URSA Mini Pro you may notice a pause around the 10% mark in the install process, this is normal and will continue installing after around 20 seconds.

After loading the software on the Blackmagic Cinema Camera PL, EF or MFT, you may notice a slight flickering on the built-in LCD screen. This is normal and expected behavior. The flickering will go away after a few minutes of operation.

Both firmware updates are available for MacOS and Windows platforms here.

In response to complaints that their EOS-R Full Frame Mirrorless camera is suffering from banding issues after a recent firmware update, Canon has been quietly working on a fix. The fix was buried in a feature […]

By James DeRuvo (doddleNEWS) Canon has announced that first generation Canon C300 will be able to add Dual Pixel CMOS Autofocus as a new feature. The update is a factory installed improvement, but with new […]

By Andrew Devis (doodleNEWS) In previous versions of our DaVinci Resolve series, we talked about setting up projects and databases, creating a project, and backing it up. Now, you’re all ready for importing your footage. […]