Grant Petty took to the stage at the Blackmagic Press Room and gave us a quick overview of what’s new this NAB. It wasn’t a lot like in previous years, but what they did announce had a huge amount of punch.  This time around, we finally did get confirmation that the Blackmagic Pocket Cinema Camera 4K  is coming this fall, and it’s STACKED with some great features. And not only that, but DaVinci Resolve 15 now has Fusion CG tools built in.

The big thing was the Blackmagic Pocket Cinema Camera 4K which now features a full micro 4/3 HDR sensor which provides dual native ISO to 25,600, as well as 13 stops of dynamic range. The Pocket 4K can also not only record to dual CFast2 and UHS-II SD card slots, but if you find yourself running short on space, you can plug in a standard USB-C hard drive and record directly to it! No external recorder needed, although you can use one if you have it in your bag. 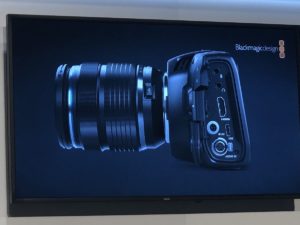 No word on if, or even when The Pocket 4K will be able to record in Apple’s new ProRes Raw, but I’m betting it’ll come in a firmware update down the road.

Price of the Blackmagic Pocket Cinema Camera 4K is an amazingly low $1295 and it will ship in September. 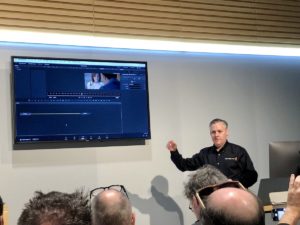 The next impressive announcement is that Blackmagic is folding a lot of their CGI tools from Blackmagic Fusion into DaVinci Resolve 15. All told, there are over 250 tools for 3d effects, motion graphics, ADR through FairLight, compositing, vector paint, particles, keying, rotoscoping, text animation, tracking, stabilization, 3d titles and more. And I especially like the new LUT Browser, which lets you preview an LUT on your footage nondestructively. Petty said that DaVinci Resolve 15 is now so intuitive, Petty says its as easily to use as bricklaying. 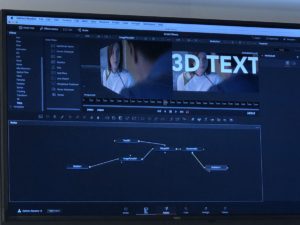 So now, DaVinci can edit your footage, add visual effects, perform audio sweetening and HDR, and, oh, it can color grade it too! Yeah, that’s how it all began. But now, Davinci really has become a one stop shop for your post production workflow, without having to deal with product bloat. Blackmagic has always made their suite modular, so that it remains resource light on your workflow, while still maintaining links all across the suite.  The update to DaVinci Resolve 15 is free, while Resolve Studio 15 is $299.

Other announcements this morning included a new up/down cross converter, updated $155; a 4K Multiviewer $195, Blackmagic’s updated bi directional micro converter $65; Cinatel Scanner 2 gets thunderbolt 3 and PCIExpress support and now runs CameraOS through a free upgrade, and Blackmagic has redesigned their Fairlight Audio console to be modular, so it’s easier to get started, and to expand. Two bays start at $22k, three bays at $29k and it goes all the way up to 5 bays for around $50,000.

It was a fast paced 16 minute presser, and the ripples it’ll send are surely going to keep the showroom floor buzzing all the way through Thursday. In fact, the booth is standing room only, just to get a glimpse of that cool new Pocket 4k!

RØDE is at it again. This time focusing on how to get the best audio wirelessly into a mobile device. And by the looks of the compact Wireless Go, everyone is going to be mic’d […]