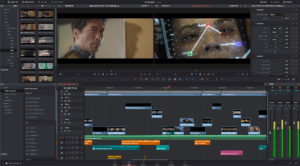 Blackmagic Design continues to refine and expand the features of DaVinci Resolve 15, with an update that fine tunes playback performance, improved keyframe animation, color science, and stability. But while many could consider this a housekeeping update, there’s also some new features as well.

A huge new feature in DaVinci Resolve 15.1.1 is support for multiple GPUs. Version 15.0 only supported a single GPU on Windows and Linux, and 2 GPUs for the Mac Pro. But through DaVinci Resolve Studio, Blackmagic has unlocked multiple GPU support across all platforms with version 15.1.1.

Then comes the improvements to existing features. Housekeeping that will make DaVinci Resolve perform at a higher level than before. Those fixes and added features include:

Version 15.1.1 is available as a free download to Mac, Windows and Linux at the Blackmagic Design support page here.

In our previous lesson of our look at learning BlackMagic Design’s DaVinci Resolve, we talked about working with 3rd party LUT’s.  In this lesson, I want to I want to talk our earlier discussion on […]