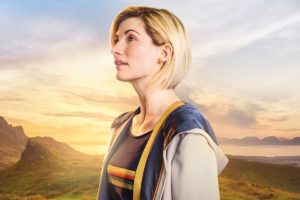 There’s a line in the season finale of Doctor Who where the Master mockingly asks Twelfth Doctor Peter Capaldi if the universe is “becoming all girl.” To which the Doctor replies “we can only hope.” Well those hopes have been answered as the BBC announced that the thirteenth Doctor of the long running British sci-fi series is Broadchurch star Jodie Whitaker.

“I’m beyond excited to begin this epic journey – with Chris Chibnall and with every Whovian on this planet. It’s more than an honour to play the Doctor. It means remembering everyone I used to be, while stepping forward to embrace everything the Doctor stands for: hope. I can’t wait.” – Jody Whitaker, the new 13th Doctor

A relative unknown here in the States, Jodie Whitaker is best known for her role as a mother struggling to put her life back together after the death of her son and the killer going free on Broadchurch, a series that’s not only stars 10th Doctor David Tennant, but also former companion Arthur Darville. But it was also been produced by lead writer Chris Chibnall. With Chibnall making the transition to taking over the keys to the TARDIS in Doctor Who, it makes sense that he would want someone familiar as the face of the series.

Honestly, though I don’t know how I feel about it. It’s not that I have a problem with a female doctor. Not at all. The BBC, however, was rumored to want a clean slate because it wanted a younger doctor to restore lagging ratings and lackluster merchandising sales. And while in Whitaker the BBC has a younger 13th Doctor, I’m not sure that in the long run that their ratings and merchandising goals will be accomplished. I’m sure that in the short run the curiosity factor will cause fans to tune in. But old school types may simply stop watching. So at best it may end up being a wash. Only time will tell.

“Because this is a really exciting time, and Doctor Who represents everything that’s exciting about change,” she said, adding: “The fans have lived through so many changes, and this is only a new, different one, not a fearful one.”

But Whitaker may prove us all wrong, as did Tennant and Matt Smith before her. Because that’s what every new incoming actor cast as Doctor Who has to do. Prove everyone wrong, and convince us to be on their side. We all have our favorite Doctors, and we all hate it when they leave. And we all place highly unrealistic expectations on the next guy. That’s just part and parcel of the life of a Time Lord and his main companions, the fans. Michelle Gomez becoming the Master (as Missy) convinced me that an actress with the gravitas to dive into a role  can earn a fan’s respect. She was wicked at it, too.

And Whitaker has Capaldi’s ringing endorsement. “Anyone who has seen Jodie Whittaker’s work will know that she is a wonderful actress of great individuality and charm,” the Twelfth Doctor said. “She has above all the huge heart to play this most special part. She’s going to be a fantastic Doctor.”

The key here is going to be Chibnall and the stories he wants to tell. Peter Capaldi was an excellent choice to take over for Matt Smith as the 12th Doctor, but his era suffered from lackluster stories that focused more on the companion being the major character, overshadowing the title role.  After three years of falling ratings, the writing was on the wall that outgoing show runner Steven Moffat’s time had come, and Capaldi decided to go with him.

So there you have it. The Master’s reluctant prophecy of the universe going “all girl” has come to pass. Now we just have to buckle up and go for the ride. I, for one, have been proven wrong before, and I hope I’m proven wrong again. She certainly has the right attitude. As a life long Whovian, I’m pulling for her. We owe the Doctor no less.

Doctor Who News Round Up – Binge Worthy

By James DeRuvo (doddleNEWS) As the new era of Doctor Who begins with thirteenth Doctor Jodie Whitaker about to redecorate the TARDIS (and yes, we won’t like it), there’s a ton of Who news that […]

By James DeRuvo (doddleNEWS) How does an actor parlay a bit role on Yahoo’s Community into his own web series with the blessing of Doctor Who and the BBC? Travis Richey, who played Inspector Spacetime, […]

(picture cropped whitaker costume) By James DeRuvo (doddleNEWS) Next month, on Christmas Day, 12th Doctor Peter Capaldi will say goodbye to Doctor Who with an epic adventure with his first incarnation, and with it, things will never be the […]