With the advent of real-time streaming, everyone wants to go live for their content. The reason is simple … people love to experience content as it happens. But you need to high performance PC to handle the processing load. Here’s a few tips on your options, plus how to piece one together.

Whether you’re wanting to create “let’s play” videos, have your own talking heads show to talk about the events of the day, or do a live event, having a high performance computer is a must to be able to process the incoming video, and then stream it out live to the world.

If you’re just getting your feet with live streaming, then going with a simple mobile phone setup like Periscope, YouTube Live, or Facebook live is a great way to experiment and see if live streaming is for you. The next step would be to take your mobile device (or multiple devices if you have a few older smartphones lying around) and then connect them together using a streaming service like Switcher Studio, or Cinamaker.

With Cinamaker, you can use a tablet to act as your switching device, while connecting wirelessly to each individual smartphone. This is great for doing a low cost, multi camera shoot like Larry Jordan did this year at NAB. Teaming up with Cinamaker, Larry was able to do a one hour interview show, live using smartphones and shooting in 1080p. But if you’re shooting in 4K, some even support using the same 4K setup to create multiple camera angles. 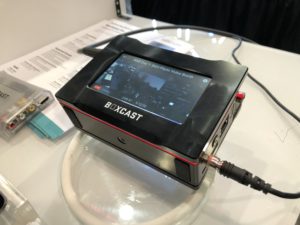 The next level up is using a turnkey solution like BoxCast. I like BoxCast because these guys get it when it comes to live streaming. They’re passionate about it. Love to help you get the ball rolling, and their all in one solutions are VERY affordable. It’s literally plug and play and you can stream from up to 4 cameras for under $1000. Another option include Sling Studio.

But we’re here to talk about building a PC to do your live streaming with. It’s for when you want to create your own network and broadcast to the world, and that means a hardware based solution. You can go with an iMac Pro in this case, sure, but building your own dedicated streaming computer can come in handy when you’re pooling together multiple sources. It also means looking at the specs for high end gaming, as they can shoulder the load of a live video stream at up to 60fps while processing the video game signal, as well as the streaming of your lets play video as you play it live.

That will likely mean an i7 or i9 Intel Processor or the latest AMD Ryzen. Also go with the fastest motherboard you can afford, which your designated processor supports. I usually like to stay within the Intel family for this, since when building a computer, if you have a tech support issues, it’s easier if all the parts come from a single manufacturer. That way they can’t blame the other guy if something is wrong.  For AMD, though, Gigabyte and MSI seems to have the top boards for the Ryzen line, according to TechRadar. So I’ll go with that.

You’ll also want a higher end graphics card, and this is going to be your most pricey investment, believe it or not, because the higher end cards have been gobbled up by bitcoin miners of late, steadily driving up the costs of available supply. But you’ll want to go with at least an Nvidia GTX1070 or above, or an AMD Radeon RX grade video card. The RX Vega 56 is great because it comes with 8GB of HBM2 on board RAM and 3584 stream processors. So it can handle the load. It is limited to 1080p, however, so you may want to try and find a an RXVega 64, Either way, expect to drop between $500-1000 for the video card alone.

Then there’s RAM. The more you have the better, but at least 16GB of DDR4 RAM is essential. The faster your can afford, the better.

You’ll also want to get a good fast SSD drive to run your software, and a case that is capable of cooling without being so loud as to ruin your live stream, unless you have the computer in another room, and in that case whatever strikes your fancy.

Lastly, you want the software that can handle the stream. Everyone seems to have a utility for this, ranging from Sling Studio, to Vimeo Live, to Facebook and YouTube who have their own dedicated live producer. But most gamers rely on Open Broadcaster Software, or OBS. It’s free and open source, and it’s ideal for gamesters and online webcam broadcasters.  It’s very flexible for events due to it’s software flexibility, and you can use it on Windows 10, macOS, or even Linux.

Getting into live streaming is a journey however, which starts with a single step. So grab your mobile device, go live on Facebook or YouTube and start streaming. And as you grow, take the next step. Then the next. Before long, you’ll have a full on streaming network and the sky is the limit.

By James DeRuvo (doddleNEWS) After a long absence on Amazon, the Apple TV has returned … and then vanished again, and the next generation 4K streaming devices sells out just hours after being listed. Since […]