In response to complaints that their EOS-R Full Frame Mirrorless camera is suffering from banding issues after a recent firmware update, Canon has been quietly working on a fix. The fix was buried in a feature enhancement update, which several camera watchers say is made evident by comparisons with the previous version. But if the banding issues are being addressed, why not mention it in vs. 1.2?

In the new firmware version 1.2.0, “Eye-detection AF” function will be available in “Servo AF” or “Movie Servo AF” settings. This function helps to track and ensure subject’s eye is continuously in focus during photo and video shooting. When EOS R is used with large aperture lenses, such as RF 50mm f/1.2L USM in a move or to shoot a moving subject, “Eye-detection AF” function will be able to keep the subject’s eye in focus for a crispy clear portrait shot.

The banding issues seem to have been mostly limited to certain EOS-R cameras after updating to the version 1.1.0 firmware, and not the new EOS-RP. Officially, version 1.2.0 addresses several feature enhancements, including a Sony like Eye detection autofocus and Small AF Frame size while shooting in Servo.  Here’s the list, plus a handful of fixes: 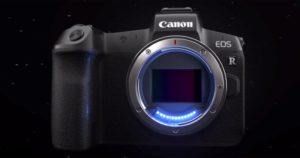 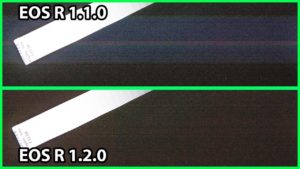 However, it seems that Canon quietly fixed the banding issues that users complained about with vs. 1.1.0, which, according to Canon Rumors, isn’t mentioned in the planned release notes.

CR points to a video by Michael Andrew (aka “Michael the Maven” on YouTube), who did a comparison of two EOS-R cameras, one with the vs. 1.1.0 update, and one without, he found that the updated EOS-R camera was experiencing banding issues.

“I can confirm that Firmware update 1.2.0 resolves the banding issue I reported back in November on the Canon EOS R,” Andrew writes in his blog. “I received a lot of unfounded criticism from those who didn’t understand the issue, but we stood by the results we were seeing, that it was a real issue, and now Canon has quietly released a firmware issue that resolves it.”

Andrew must be in the beta testing program, because he recently posted a similar video that shows the issues have been fixed with version 1.2.0. Check out the video below:

Regardless, I’m just glad that Canon moved quickly to dial the firmware in properly.

Version 1.2.0 can be downloaded from the Canon USA website here.

It always seems that Sony’s camera sensors can do far more than their feature set lists, and usually in a few months to a year, there’s an optional license which unlocks the really killer features. […]

By James DeRuvo (doddleNEWS) Canon has announced three new full high definition camcorders; yep, you read that right, HD. The cameras are geared towards the prosumer market, and have all the usual refinements. But what […]