Last year, camera rental and sales reports indicated that shooters are preferring mirrorless cameras over DSLRs for the very first time.  That, coupled with the excitement brewing over both Canon and Nikon’s upcoming full frame mirrorless cameras, and it’s clear we’re in the middle of a mirrorless camera revolution. But DSLR users may be the biggest beneficiaries as some of their comrades sell off their gear to go Mirrorless.

The buzz has been that both Nikon and Canon are shifting focus towards mirrorless camera design, even though they will continue to create DSLR cameras. Camera geeks are going to want to get in on the action, much like they did when the Panasonic GH mirrorless line started the micro four thirds mirrorless trend. As a result, eBay and other used camera portals were starting to fill up with camera bodies and lenses for sale. The more popular mirrorless trend becomes, supply and demand will kick in and the price of that camera gear will begin to drop. 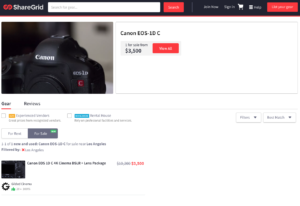 sequently, as DSLR filmmakers follow the trend and go mirrorless, beginning filmmakers, and those looking to transition from smartphones and GoPros can benefit by upgrading their gear into the DSLR category.  And that also means that DSLR users looking for find some great lenses, will also be able to take advantage, as they flood eBay. But not only lenses and bodies, but all kinds of accessories including grips, cages, filters and more. FStoppers calls this “Gear Acquisition Syndrome” or G.A.S.

But not all at once. Since Canon and Nikon are both making full frame mirrorless cameras, DSLR users who have those DSLR platforms, will want to get their feet wet with an adapter first. But as time moves on, more will drop that in favor of prime mirrorless lenses that don’t require any crop factors or math to get the exposure right. 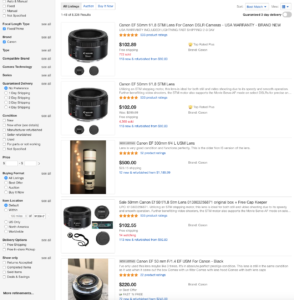 And eBay isn’t the only place to find used gear online. To keep up with demand, rental houses that continue to see a rise in mirrorless camera rentals, will likely sell a portion of their DSLR inventory to make room for more mirrorless gear. That will translate to a higher maintained used product, even if you end up paying more for it than on eBay.

Then there’s the Facebook marketplace (my current favorite) and Craigslist. All of them will have listing for new gear as the Mirrorless market continues to heat up. Then again, if the Nikon and Camera full frame mirrorless cameras are duds, then it could either push shooters already committed to transitioning over to the Sony and Panasonic platforms, or it could stall mirrorless altogether. I don’t think the latter is going to happen.

Either way, the used camera gear market is about to explode … again. And we have the evolution of technology to thank for it!

Old School SLRs Get New Life with Digital Back

By James DeRuvo (doddleNEWS) When the digital revolution took the creative realm by storm, perfectly good 35mm cameras were left collecting dust, or worse, relegated to forgotten bins in thrift stores, where you could pick them up […]

by James DeRuvo (doddleNEWS) Although Canon’s Dual Pixel CMOS AF has changed the way shooters focus images, the common complaint about the camera company is that they’re simply too slow at keeping up with the […]