UPDATE: According to Canon Rumors, while falling short of an official product announcement, Canon will be showcasing an 8K capable Canon C300 Mk. III at NAB in April.

It’s been a few weeks since we ran with a juicy camera rumor, but the latest is that Canon will be announcing a Canon C300 Mk. III and it’ll be an 8K camera to take on RED and Panavision (which actually has a RED sensor under the hood). 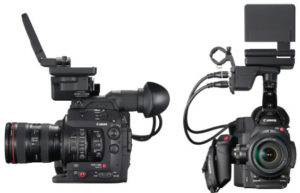 The Canon C300 Mk. III was rumored to be announced shortly after Photokina, but that came and went, with Canon focusing instead on announcing the Canon EOS-R Full frame mirrorless camera instead. Now, according to the scuttlebutt amongst camera watchers, the Canon C300 Mk. III would come in late 2019. And while it would initially record 4K internally, like its predecessor, it would also have the option of upgrading to 8K for an additional cost. The Mk. III would also get 444 color science, and improved electronic image stabilization.

But here’s the thing.  If the Mk. III will have a similar sensor as the Mk. II, why couldn’t users just pay for an 8K upgrade with the camera they have? Unless, of course, the Mk. III will actually have an 8K sensor and it will be deliberately hobbled to only shoot 4K, until users pony up more for the 8K license. That’s what Sony has done for some of its models.

So to go 8K seems like  too huge of a leap to me for an upgrade. Why wouldn’t Canon just announce a new model? A C800 for instance? That way they could do an upgraded Canon C300 Mk. III that would have the modest improvements that Canon usually does. I can see it beefing up IS by  going IBIS, offer 12 bit Canon Raw 2 recording, greater dynamic range and a few other things, including, maybe CFExpress?

Also, there are rumors that it will shoot 6K, and that this same 6K update would be for the C500. Knowing Canon’s conservative approach to upgrading,  all of this sounds more likely. If anything, that would leave Canon free to announce a separate 8K model altogether. Since it’s a new base model.

I know, potato, potahto. But I think it’s clear that Canon really does need to up its resolution game if they want to keep pace with the industry. Either way, a late 2019 shipment date means we won’t hear any serious spec news until around NAB.

UDPATE II: The Canon EOS RP isn’t even out yet, and it already has a firmware update. Firmware Version 1.1.0 includes support for Camera Control API (CCAPI)* function, for software developers, and HTTP-based API for camera […]

By James DeRuvo (doddleNEWS) Update: MacRumors has reported that Ming-Chi Kuo has further “clarified” his position, saying  Apple will keep the X line, but the first generation won’t become a lower cost alternative, as Apple […]