Over the next two years or so, executives at Canon are expecting DSLR sales to drop by as much as 50%, as the camera market continues to compete with improved smartphone cameras and expanded competition from other camera makers including Nikon. So much so, that the camera company is shifting their focus to commercial camera applications, while still meeting the needs of their consumer clientele.

One of the things that drives me crazy about Canon, is their snail’s pace approach to camera innovation. It always seems like other competitors, such as Panasonic and Sony are pushing the bleeding edge for mirrorless cameras, Canon has been content to add a feature here and there and gradually improve DSLR performance. 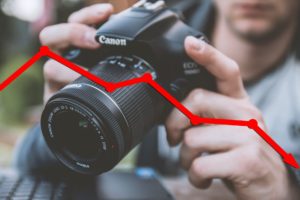 But here is where that approach may have paid dividends. Canon President Fujio Mitarai has said in a recent interview with Nikkei, that since 2010, DSLR sales have been steadily decreasing  … by as much as 10% a year. According to Mitrai, the entire global market is currently selling 10 million cameras a year, which includes prosumer and professional models. Consequently, the trends point to a bottoming out of the market to about 5-6 million a year.

With that kind of drop, you want to protect as much of your existing sales, rather than accelerate the decline by cannibalizing them with a new model or feature. But eventually, there comes a point where you have to make a strategic shift and move to where the wind is, and right now, the wind is favoring mirrorless designs.

This explains why Canon made the move to a full frame mirrorless camera in the EOS-R, to excite the customer base who has been wanting a mirrorless option for years. But Mitrai also says that Canon’s mirrorless sales aren’t expanding the market at all, but merely replacing existing DSLR cameras, meaning that Canon is eating into their own sales as users sell off their well used DSLR and replace it with a mirrorless model.

How will this affect the entry level market? Well, let’s face it, it’s not that great anyway. Most entry level shooters are using smartphones. So I would expect that Canon would maybe put out an entry level DSLR or mirrorless camera every so often, while pushing users to go to a prosumer level to grow their skills.

Moreover, while Canon will continue to service their DSLR and Mirrorless customer base, they believe that the main market for cameras is in the commercial realm. To that end, according to an interview with Nikkei, Mitrai states that Canon will be shifting focus further to commercial applications, including surveillance and the medical field. It’s unclear if their Cinema EOS line of cameras fits into the commercial realm for filmmaking, but even there, you can expect that Canon will do all it can to preserve their professional relationships with a steady flow of new models with expanded features.

This may be why rumor sites keep hearing that the Canon C300 Mk. III could be an 8K model. Only time will tell, as NAB is only three short months away. And even then, we may not see one.

UPDATED: Nikon has moved to sweeten the pot even further to get mirrorless fans to give the Z6 or Z7 full frame mirrorless camera a go.  Users who buy the camera will now receive the […]

By James DeRuvo (doddleNEWS) There’s a little more evidence to suggest that not only Canon will be putting out a full frame mirrorless camera in the near future, but Nikon as well. Are we poised […]