There’s an 8K Cinema EOS camera coming.  That isn’t a rumor, because Canon has previewed some footage from it, as part of a short film on Japan. And it looks pretty great.

“Canon’s 8K technology delivers not only extremely high resolution, but also high dynamic range and rich color expression. And with the ability to record in 8K RAW, we could represent our subjects with more true-to-life visuals. Finally, thanks to the ease of scaling our existing 4K equipment to accommodate our workflow, we were able to film without any trouble. I hope our work will allow even more people to experience the beautiful scenery of Miyazaki.” – Ichiro Shimada

First, let’s take a look at the footage, because I think that first impression is how Canon is trying to position this new camera before we dive into any specs. Granted, this will be a challenge because YouTube really isn’t capable of showing the footage in true 8K, yet. Hell, it’s not even in 4K. It’s 1080p. So you’ll just have to take Canon’s word for it, that it was shot in 8K:

Even viewing at 1080p, you can see an impressive amount of detail, dynamic range and HDR color gamut. The film, shot by Ichiro Shimada with a prototype Canon Cinema EOS 8K camera that saved the 8K Raw footage to an external recorder, shows the incredible cultural elements of the Miyazaki Prefecture in Japan.

The shots were designed to highlight the dynamic range of the camera, by going in an out of ambient dark and light areas, that had a ton of details in the architecture. The video highlights scenes from the Takachiho Shrine, Amanoyasugawara cave, sake making at a brewery in the town of Hinokage, and even some ritual Kagura dancing, making the audience feel like they are there to experience it first hand.

The 8K camera used to record this content is equipped with a Canon-developed 8K image sensor that realizes ultra-high resolution of 8192 x 4320 pixels—16x that of 2K—high-precision HDR and a wide color gamut. All of this makes possible the capture of footage with quality, presence and immersion that’s like seeing with the naked eye. – Canon 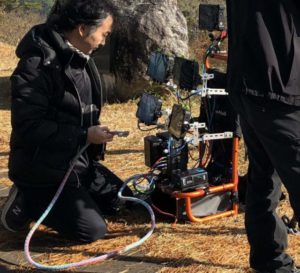 Impressed yet? OK Let’s talk about the specs we know. Which isn’t a lot. First, it looks like Canon used the same basic camera skeleton as the C300 Mk. II or C500. Either way, it likely means they just reworked it with an 8K Super35 mm sensor.  The camera also shot on an array of EF Cinema lenses, covering the full range from wide-angle to telephoto. It’s come a long way from the mammoth prototype we saw in 2016.

Canon is also developing the 8K platform for fully immersive experiences through what they call the Free Viewpoint Video System, a 360 video rig that will shoot with multiple 8K cameras and will give viewers the option of moving around the scene. I sense a future CircleVision movie coming to Disney World!

No word on when the camera will hit the market, or what it will be called (C900 perhaps?), but NAB is only 3 weeks away and I wonder if Canon will give us more of a clue there. Only time will tell.