Man, it’s been a busy week for Canon! First we got the long expected 5D MK IV, then came the Global Shutter CMOS Sensor, then the addition of the Canon C700 to the Cinema EOS line. Now Canon is upgrading their ultra portable XC line with the XC15, which will now record in 4K Raw. But the really important feature is that, thanks to user feedback, Canon has improved the audio recording capability with a new XLR Mic adapter.

“The new Canon XC15, which builds on the XC10 4K UHD digital video camcorder announced in April 2015, enables shooting with an external microphone through an XLR input and features the selection of visual-expression “Look” modes, including modes that allow it to match the look of other Canon professional cameras, making it ideal for use as a “B”-camera as well as for media and video-content productions.” – Canon Press release 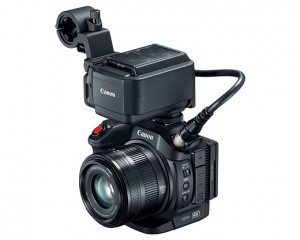 The main beef of the first generation Canon XC10 was that the audio recording capability was lacking. Canon has addressed this issue by including an MA-400 XLR microphone input adapter, enabling content providers to use better quality external microphones. This is the same adapter used with the Canon C300 MK II. But I think it’s cool that Canon is tossing it in, rather than offering it as an accessory for extra purchase price (which would be around $500).

Canon is also adding some audio menu options including mic trimming, mic log cut and internal mic sensitivity, so you can dial in your audio to your liking.

But where things have improved is that Canon has also included the same movie looks from the Canon C300 MK II, as well as the same capability to record 4K at 24p at up to 305 Mbps. Both features will help for using the XC15 as a B camera, so that colorists are spending less time color grading to match. Canon has also added three additional shutter speeds to reduce flicker, and use the waveform monitor display feature to match lighting conditions indoors or out.

And though the XC15 doesn’t strictly record in HDR, Canon has added something called Highlight Priority Gamma, which mimics HDR and is likely their own spin on the technique. The way that Canon explains it is that Highlight Priority uses gamma mode to provide a bright linear display that reflects a more accurate tonality that we normally see with the naked eye.

So all things considered, it’s a basic dot upgrade, but a worthy one. Preorders for the XC15 are being taken now, for a list price of $3,000, but B&H has it listed right now at $2,399 [affiliate link]. So if you’re looking to get one, that’s where I’d start before they realize their mistake. Shipping is expected at the end of September 2016.