Photographers who are down in Rio for the Olympics Games will be like a kid at a candy story for the next two weeks. Not because they will be shooting video and photos of the grandest athletic spectacle on the planet, but because Canon has coming to the games with just about every single piece of gear in their warehouse for photographers to use.

“Canon is proud to offer professional photographers and broadcasters high quality image-making solutions that are thoughtfully designed and versatile so that they can capture sharp, clear, detailed images and video. Knowing that iconic images will be captured, seen and shared by people around the world really drives Canon to provide professionals with not only high quality equipment but the customer support they need to help ensure they never miss a beat if anything happens to their equipment.” – Elizabeth Pratt, director, Professional Client Development and Support, Canon Press Release 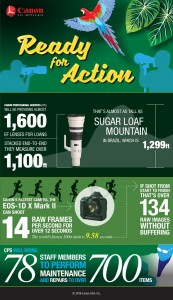 Selected as the official provider of field and studio equipment for the Games of the XXXI Olympiad, Canon shipped nearly 1,000 DSLRs and almost over 1,500 lenses down south to make sure that shooters for Reuters, Getty, AP and others will have the gear that they need. The gear will be housed at the Canon Professional Services Depot in Rio, and will include bodies ranging from the brand new Canon 1D-X MK II all the way down to the Canon 7D Mk. II, and everything in between.

Lens-wise, Canon is bringing so many lenses to loan out, that if you could stack them end to end, the building would be nearly as high as Sugar Loaf Mountain in Brazil (about 1300 feet). NFS speculates the value to be somewhere in the millions!

No word on which Canon Cinema EOS cameras made the trip, but all told, they will be loaning out nearly a quarter of a million dollars in professional grade camera equipment (although honestly I think it’s more like twice that).

To service the hundreds of professionals at Rio, Canon is bringing nearly 80 staff members who will not only loan out necessary gear, but also perform routine maintenance and repairs on any equipment that is broken during the month long sports fest (although the games themselves are only about sixteen days plus opening and closing ceremonies).

From pro DSLR cameras and EF lenses to broadcast television lenses, Canon’s award-winning service and support staff will be providing preventative maintenance and repairs to help professionals who put their trust in Canon imaging equipment.

That’s a LOT of glass and gear. I wonder how much will make it back alive!