Displays are the theme of today’s CES 2019 coverage, as we take a closer look at a super wide monitor, LG’s rollable 65″ HDTV and their video tunnel, Targus’ 4 screen hub, and VisionTek’s new external GPU enclosure for Thunderbolt 3. Plus, the bendable smartphone that wants to be a tablet! 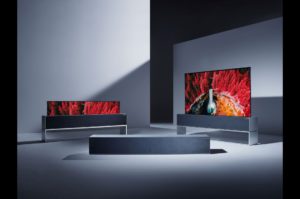 Let’s start with LG’s rollable OLED 4K TV. Thanks to organic LEDs that enable a rollable surface, the 65″ Signature Series 4K OLED-R (model OLED65R9PUA) is a marvel of engineering that will enable your video screen to be put just about anywhere.

And then, with a touch of a button, the screen comes up out of its rectangular cubed cabinet for viewing, and then back down when you don’t need it. The cabinet also doubles as a 100 watt Dolby Atmos home theater system with sounder and subwoofer. “Instead of being a giant black mirror, you’re left with a high-tech credenza,” writes Devindra Hardawar of Engadget.

The OLED-R is on par with LG’s other top of the line 4K OLED displays, with Dolby Vision, a frame rate of up to 120hz, is powered by LG’s WebOS operating system, with support for Amazon Alexa and Google Assistant. LG is also planning to add Airplay 2 and HomeKit so that users will be able to rent and stream content from Apple’s iTunes store.

LG also says that the TV will work well for a good 50,000 rolls before it will need to be replaced. That’s in optimal conditions, mind you, but doing the math, even at half that, you’ll be replacing it long before the screen reaches its rated roll limit.  No word on pricing yet, but LG says it’ll be available by next Fall. Expect it to be PRICEY.

LG also drove home the point of just how flexible this screen is, by creating a fantastic tunnel for attendees to walk through, that gives them an immersive feel of being in space. This isn’t the first time LG has done this. But they have truly taken it to the next level with the bendable screens. Check it out.

No, you're not floating in space. This immersive video experience is courtesy of hundreds of curved LG OLED Tv's. #CES #CES2019 https://t.co/ZK93EtCXhr pic.twitter.com/lpzrF2RUvR

LG also showcased a massive 49″ ultra wide curved display with an 32:9 aspect ratio, making it ideal for those who need a ton of screen real estate in their work. That means a colorist, editor, and even visual effects artists will be hard pressed not to find this thing sexy. 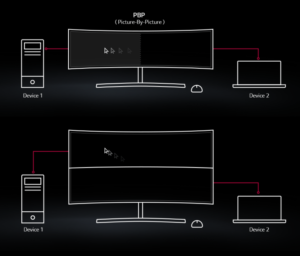 The L95C-W also comes with a pair of built in 10 Watt Rich Bass stereo speakers, which are designed to cover a small editing room without any need of another sound source.

Like the rollable LG OLED-R, there is no price listed yet for the L95C-W, but it’ll likely be available later this year. 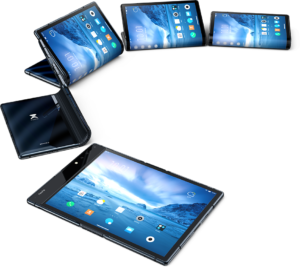 Speaking of bendable, another thing that is catching attendees’ eyes this year is the Royole FlexPai foldable smartphone. The FlexPai is a 7.8″ tablet that bends in the middle and then adjust to the smaller form factor to become a smartphone that fits in your hand.  The screens can also be configured as split screen, or full with aspect ratios of 4:3, 16:9 and 18:9. There’s also a screen on the spine which serves as your notification window.

Price of the Royole Flex Pais is around $1300 for the 128GB, which, considering the cost of the iPhone XS Max, is pretty competitive. Developer models are available for Preorder now, shipping within 60-90 days. 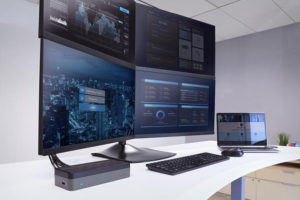 But for all that pricey display options out there for hi-tech, bendable OLED screens, what if you just want to affordably build your own multi screen editing rig? Well, Targus has you covered with the DOCK520USZ USB-C Universal Quad Video HD Docking station, which allows users to connect a laptop to up to four monitors via HDMI out ports and a single USB-C cable. 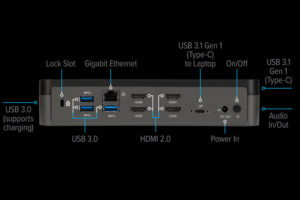 Winner of a 2019 CES Innovations Award, the Targus Quad Video docking station uses Dual DisplayLink technology to manage all four screens via HDMI 2, but can also support Thunderbolt 3, DisplayPort Alt-Mode, USB 3, and Type-C devices. It’ll work with PCs, Macs, Chromebooks, and Android Devices. And the price? How’s starting at under $110 sound? I’m getting one.

Learn more about it at Targus.com. 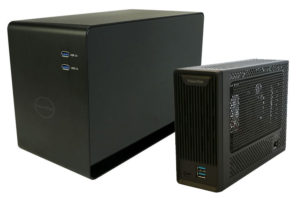 Lastly, Visiontek is offering a new Thunderbolt 3 Mini eGFX external graphics enclosure, which allows users to create their own external graphics unit by adding a customizable array of Nvidia GPU cards, and then connecting ao any Thunderbolt 3 laptop or desktop.  Delivering up to 40Gbps of bandwidth, the Mini T3eGFX enclosure is compatible with a wide array of mini eGFX graphics cards, with discrete GPU performance.  The enclosure can also drive up to six 4K displays at up to 60fps, and is scalable to the needs of the user. It comes with two Thunderbolt 3 ports, PCIe-to-USB and PCIe-to-LAN controller, 2 additional USB 3.0 ports and one (1) RJ45 ethernet Gigabit LAN connection.

And unlike the pro model put out by Blackmagic and Apple, this one is upgradable!

The last day of CES has come and I’ve finally found Razer’s contributions to this year’s confab, as well as getting a look at AMD’s Radeon VII 7nm graphics card. Also, we announce our annual […]

The Perfect Camera If Money is No Object

So if you had “unlimited money” to create the perfect camera platform, what would it be? What would you need? And how would you build it? That’s the concept answered by Corridor Digital and B&H, […]