The last day of CES has come and I’ve finally found Razer’s contributions to this year’s confab, as well as getting a look at AMD’s Radeon VII 7nm graphics card. Also, we announce our annual Best in Show for 2019!

Razer. You know Razer. It wouldn’t be CES without their bleeding edge designs that seem to be created more for getting awards than for actually making it to market. Last year’s was the smartphone powered laptop called Project Linda, the year before that, it was the three screen laptop prototype called Project Valerie, that ended up being stolen at the end of CES. Neither of which ever made it to the market, that I know of.

But the last few years, the gaming hardware company has been working harder at designs which can do both, and this year is no exception.

Now I know what you’re thinking. “James. This is a filmmaking blog, not a gaming blog.” You probably think that every year when I talk about Razer designs, and I would agree, but all too often, the high performance gear that gamers craft to get an edge on the competition, are also ideal for handling the higher performance workflows of UHD, 360 video, and VR. So why not take a look at what we can use?

Razer Raptor. The Razer Raptor is stylish, 27″ IPS flatscreen monitor with a resolution of 2560×1440 with a 144Hz refresh rate. The Rapto has a contrast ratio of 1000:1 with 420 nits of brightness, and has a response rate of 7ms, which can be reduced to 4ms with Overdrive, or 1ms with motion blur reduction.

The Raptor also uses P3-D65 color gamut, and comes with AMD Radeon FreeSync, for incredibly smooth display at higher frame rates, and will be supported by Nvidia, as well as AMD’s Radeon line. Cost is $699.99 and will be available later this year. 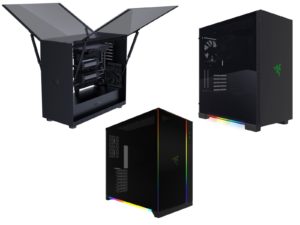 If you’re into building your own PC or Hackintosh, Razer has a very cool case that is designed for cooling and ease of access when you need to upgrade to do a little Spring cleaning. The Razer Tomahawk Elite has a minimalist design, fits ATX motherboards. It has reservoirs to support liquid cooling and hydraulic powered,  tempered glass panels that come up on either side for optimal access. There is room for several GPUs, and if that wasn’t enough, it comes with Chroma lighting that supports 16,8 million colors. 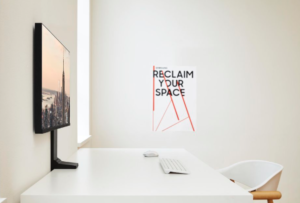 Samsung. Speaking of monitors, the larger your monitor gets, the less desk space you have. I have a 27″ iMac that dominates my desk, leaving little room for anything else, like my new Rodecaster Pro mixing board (review soon), or the clutter I am constantly battling on my other desk. So that’s a good thing.

Samsung has come up with a great space saving design they call the Space Monitors line. The SR75 Space Monitors come in 27″ and 32″ models, and attach to the back end of your desk, flush against the wall. It almost looks like it’s wall mounted, so it stays out of the way and frees up precious desk real estate when not in use.

But when you need to get a close look, you can bring the monitor down using its retractable arm, that is also adjustable for the right angle. It’s a very craft, yet minimalist design. The Space Monitors are VA powered with traditional backlit LEDs, a resolution of 2.5 for the 27″ and 4K for the 32″, brirness of 250 nits, and a frame rate of 60Hz.

Samsung has also upgraded their ultra wide 49″ CRG9 QLED Curved monitor to a resolution of 5120×1440, with a a peak brightness of 1,000 nits, and a max frame rate has dropped to 120Hz, which now supports HDR with FreeSync2. No word on pricing, but the previous model launched at $1500, before it dropped to its current $1,000 price. 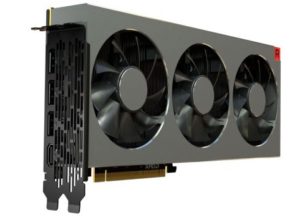 AMD. Meanwhile, over at AMD, the graphics and CPU company announced the Radeon VII, which the company calls the first 7nm GPU on the market.  Based on AMD’s higher end Vega line, the Radeon VII has a massive 3,840 cores with a speed of 1.45GHz, which can be boosted to 1.8GHz. When you do the math, that equates to 13.8 teraflops of performance, over 1.16x faster than AMD’s top of the line Vega 64. It also offers double the render output to 129, and has 16GB of HBM2 RAM for 1TB/S of bandwidth.

Cost of the Radeon VII is expected to be $699 and it will be available February 7th. I’m not sure if it will outpace the latest NVdia RTX GPU, but it’ll certainly give it a run for its money, and competition is always a good thing. 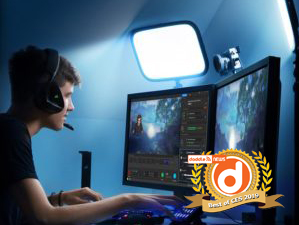 And that just leaves Best in Show. Frankly, there really wasn’t a lot to compete for it this year, at least from a content creation perspective. But the second I saw the elGato Key Lights, I knew it would probably take the honors.

I give the award based on availability, affordability and utility. And let’s not forget the cool factor.  In essence, would I buy it? Could I buy it? And would they benefit my current workflow? The answer is yes to across the board.

It’s hard to argue that from a utilitarian perspective, the elGato wouldn’t be extremely useful for content creators looking to get into live video streaming from their home studio.

The desktop mounted design, courtesy of a simple screw clamp, with retractable monopods that can adjust the light’s angle, and it’s ability to be controlled from your desktop or mobile device make the elGato Key Lights extremely useful. 80 OSRAM ultra bright LEDs light the way, with a brightness of 0-2500 lumens, and an adjustable color temperature of 2900 to 7000 K, with hues from arctic blue through sunset amber. And at $199 a piece, you’ve got an excellent lighting package for your home studio.

It may not be as sexy as LG or Samsung’s 49″ curved monitors, which I would give honorable mention, but they are a tad pricey for our budgetary needs. Meanwhile, the elGato Key lights would sure come in handy when you’re live streaming on a budget. And thus, they get the nod.

That’s it for CES 2019. But fear not, NAB is just around the corner, and we’ll be there covering it all.

By James DeRuvo (doddleNEWS) One of the favorite booths that I visited at NAB last year was SmallHD, because they were so confident in the daylight viewable capability of theirBright 702 and Focus camera monitors, that […]

By James DeRuvo (doddleNEWS) CES 2018 will have to go down as one of the most dull tech shows in recent memory. At least when it comes to filmmaking. But to be fair, everyone in […]