Now that Nikon has finally upgraded the firmware in their Z series mirrorless cameras (and ultimately the D850 and D500 models) to allow shooters to write images to CFExpress, rather than XQD, you can expect the faster format to become the once and future king for video. Why? How’s a read/write speed of 1600MB/s sound?

ProGrade has recently announced a two new upgraded CFExpress media cards, Cobalt and Gold Levels. These cards are designed to handle the capture of 4K Raw video, which ProGrade states are ideal for uninterrupted long form interviews and recording at higher bit rates. This leads me to believe that the standard is laying plenty of runway to future proof the standard for upcoming higher performing 6K and 8K models. Or, at the very least, for high bit rate HDR in 4K Raw.

The cards come in 120GB to 1TB file sizes, with writing speeds of up to 1400MB/S. Though buried in the specs is “minimum SUSTAINED write speeds of 150-400MBps.” That’s likely for video, and frankly, that’s still blazing.

The cards are being seeded out to developers and qualified partners for beta testing, and Prograde says that “cards and readers will be available for purchase by the general public as soon as firmware for existing compatible cameras is updated or when new devices are introduced into the market.”

So, for Nikon cameras, that means now. I’m betting though, that ProGrade will announce widespread availability by NAB in April. 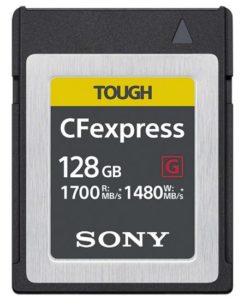 Not to be left out of the party, Sony has announced their own line of TOUGH CFExpress media cards.  The new CFExpress Type B memory card offers a write speeds of slightly higher than Prograde’s, topping out at 1480 MB/S, and read speeds up to 1700MB/s.

The extreme weather resistant media cards are designed to take advantage of Sony’s MRW-G1 Type B high speed memory card reader.  Type B is rated to be around 3 times faster than Sony’s fastest CFast memory card reader, which tops out at 530 MB/S.

The cards will be available starting at 128GB, with 256GB and 512GB versions coming down the road. Both the media cards and Sony’s Type B reader will hit the market this summer.

Nikon’s Z7 and Z6 full frame mirrorless cameras are getting some really good reviews for image and video quality. But while it has some really great options for shooting 4K video, one thing both cameras are […]