Even though IMAX is impressive, 70mm is my all time favorite film format. There’s just something about the color, grain, and scope. So when I heard that Christopher Nolan’s DUNKIRK was going to be released nationwide in 70mm, like many other fans, I was excited.

If you’re not privy to the true story that Nolan’s Dunkirk is based on, it’s the story of the British Expeditionary Force who was trapped in the French city of Dunkirk with their backs to the sea, while the German blitzkrieg was bearing down on them. With 400,00 troops stranded on the beaches with nowhere to fun, and short on ammunition to defend themselves, they were trapped. Then came help from Great Britain from an unlikely source: Thousands of small civilian boats who volunteered for a rescue operation. It’s a thrilling tale that I can wait to see on the big screen.

Director Christopher Nolan and his cinematographer Hoyte van Hoytema, shot about three-quarters of the film on IMAX thanks to their 65mm camera and Panavision large format lenses. But that’s okay, because it’s close enough to 70mm for me. And It apparently has come out so well, that Warner Bros. has decided to release it in 70mm in 125 theaters across the U.S., which makes it the widest release in the format in over 25 years. 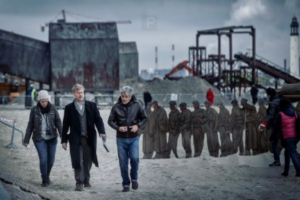 But while Nolan wanted to go wide in scope, he was also cognizant of the reality that being a war film, much of the action scenes would be shot handheld to give it a more kinetic feel. So van Hoytema did something that few cinematographers would even try: “Hoyte hand-held the [IMAX] camera for a few sections of Interstellar very effectively,” Nolan told Entertainment Weekly.

“[And] then on this, I had to break the news to him that he was going to be doing it for a massive amount of the film. We could get on a small boat with a number of characters and just shoot IMAX as if we were shooting with a GoPro.”

The last feature to go big for its presentation was Quentin Tarantino’s The Hateful Eight, which he shot on Panavision 70mm cameras and some extremely vintage anamorphic lenses. With the huge format, and the nature of shooting 2.76-1, Tarantino would have to find theaters that could accommodate the format. Even going so far as convincing theaters to spend upwards of $8 million to put 70mm projectors in so they could show it, though there were some technical issues, since many projectionists handle digital these days.

So Nolan’s Dunkirk can take advantage of that with a huge nationwide release, and Warner Bros. is putting their considerable clout in making sure people can see it as Nolan envisioned it. But where can you see it and how?

Fortunately, Warner Bros. has created a comprehensive list of the theaters all around the country which will carry the film, and in its various formats, which include IMAX, straight 70mm, and Wide Screen DCP (see below).

You can find a 70mm theater near you by going to Dunkirk’s official website here.